Since I've been gone

Apologies for the lack of posts this week. I just don't seem to have had much to say. But I just started reading the whole Seven Soldiers thing, so expect a comment or two on that soon.
Posted by Marionette at 2:23 pm 5 comments:

Violence and the single girl

The Fan Fatale forum over at Big Monkey Comics brings up the subject of violence in comics, and how it differs where women are concerned to when it's just guys. This got me thinking, but it's a big subject and there is no way I can address it properly with one post, so I've decided to make it an occasional series that I'll add to whenever I can think of something to say on the subject.

The forum asks if violence towards or by women is portrayed differently than when it only involves men. I think another related question to consider might be will violence by or toward women be perceived differently by the reader?

I'm going to leave you to think about that for a while and take a look at a scene from Supergirl #3.* 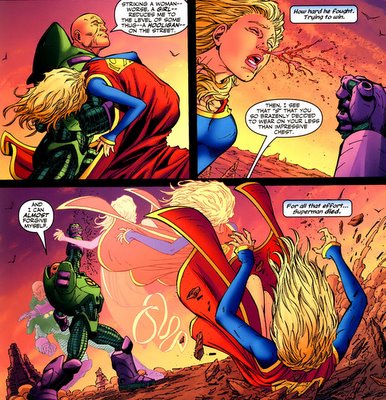 Lex Luthor, who has been obsessing over Supergirl for some time, spying on her and pasting up candid photos over her all over his walls finally confronts her and beats her up. Now disregarding the whole creepy stalker aspect of the situation, what we have here is the classic hero/villain confrontation which can be found in virtually every comic ever published by Marvel and DC. So why does Lex feel the need to justify himself?

There is something distasteful about the whole scene. Is it because it's an adult male beating down a 15 year old girl? There have been teenage girl superheroes for a long time. Supergirl herself has been around since 1957. In the silver age a girl hero would be generally pitted against a girl villain, but Supergirl has fought plenty of adult male villains, and even faced off against Luthor on plenty of occasions. So what is different about this scene?

Is it that attitudes have changed over the years and such a scene carries connotations it would not have had before? Is it that Luthor, known for psychologically torturing women for fun, suddenly feels the need to justify attacking his enemy? Or that the explanation he gives is so thin and pathetic? "You wear the big S and that makes it okay for me to beat the crap out of you" doesn't begin to cover all the creepy stalker stuff that's led to this confrontation. 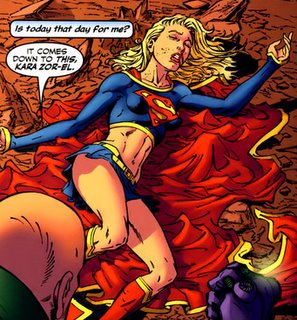 I think a lot of it is that the fight is so totally one-sided and so brutally depicted. Okay, at the end Supergirl appears to have hardly a scratch on her, but that's just a problem with the artist who has just shown her being repeatedly hit so hard that she's spurting blood but is incapable of actually making her look as if she's been bruised. Personally I think if you are going to show violence then do it properly and show the effects of that violence. I'd really rather do without the brutal beatings at all, but if you have to show one, then don't lie to us and pretend that 5 minutes later the character is all better with barely a hair out of place.

*Disclaimer: I picked this comic because it contains the scene I wish to address and I would have done so regardless of who wrote it. Those people who make a fuss every time I discuss a comic written by Jeph Loeb are free to suggest an alternative comic which contains an equivilent scene that I could address. Otherwise please feel free to get over yourselves.
Posted by Marionette at 4:11 pm 13 comments:

Glad to be gay

Why not just do them for calling him gay? Because now in the UK to call someone gay is not in itself libelous. As character defamation it has all the power of calling someone "bignose".

I can't but help see this as a mark of greater tolerance toward alternative lifestyles. It almost makes me feel patriotic.
Posted by Marionette at 2:22 pm 11 comments:

He was the one who had the odd idea that Scandiwegion gods should speak in elizabethan english which, when you think about it makes as much sense as giving Kali and Ganesha japanese accents. But it kind of works to a degree, and does give the Aesir a sense of difference from ordinary mortals. Well, other than ordinary mortals that use thee and thou a lot, anyhow. The big problem with this is that a lot of the writers on Thor, being American, haven't got much idea how elizabethan english works, so they get it wrong a lot.

Okay, I have an advantage here. I'm british. I may not be able to tell you which way up our national flag is supposed to go, but I was taught Shakespeare well enough to get the jokes in Macbeth. It also means that the occasional Shakespearian word makes it into everyday speech here and there.

Most of the time you ignore the stupid mistakes. Either that or you don't read the comic. But now and again you get something that is so stupid it's funny. Case in point:

Now Dan Jurgens is apparently under the impression that "anon" means "immediately". It doesn't. It means "at another time" or "later". So here we have Hercules saying with great anger "Apologise to my father, Thor. In the fullness of time."

Similarly here we have Balder sent on a desperately urgent mission to Svartelfheim, and he says:

Translation: "If your life matters to you, you must free me at some point in the not too distant future!"

It gives the action a much more relaxed feel to it, don't you think?
Posted by Marionette at 1:06 pm 8 comments: