In which I attempt to do something different from everyone else reviewing the new DC comics by judging the impact they have made on me through attempting to recall anything about them a week after I read them.

Batman & Robin: Damien is a brat as ever.

Batwoman:  So pretty! And there's ghosts and stuff.

Demon Knights: Etrigan's in love.  It's so cool. Ystin is my hero or heroine or somewhere inbetween.  Madame Xanadu is there too, and a mysterious horsewoman.  There is drinking and castles and snarkiness and dragons.  I am looking forward to next issue.

Frankenstein, Agent of S.H.A.D.E.: There's this town, see, where everyone's been turned into monsters, and Frankie was vacationing on Mars so he's pissed that he was called in, but there's also the Creature Commandos, who are like a Universal monster movies star lineup, and they fight the monsters the townspeople were turned into and the Frankie's four-armed ex, who I think is called Nina was there too.

Green Lantern: Hal Jordan isn't Green Lantern because of some unexplained thing. Sinestro is a Green Lantern even though he is the bad guy.  The Guardians really need to have someone to point out when they are doing monumentally stupid.

Legion Lost:  I tried, honestly I did.  I got about as far as page three or four several times, but each time I got so far and then life seemed too short to continue.  It's the extreme opposite of accessible.

Mister Terrific: Mr T's girlfriend seems to be Karen Starr who may or may not be Power Girl. I quite liked this one but I don't recall much more than that other than a bad guy shows up at the end.

Red Lanterns:  It's cute because Atrocicus has a cat who is also a Red Lantern. And some stuff happened, I guess.

Resurrection Man: The bad guys are chasing Resurrection Man, who gets killed and then gets better and then gets new powers, but he doesn't wear a cape. And there were these two girls who I read somewhere are the Body Doubles, who I thought were a copy of the Dirty Pair except they are idiots.

Suicide Squad: The squad are on a mission, except SURPRISE! it was a fakeout all along, and I know all the names, but they are being played by different, and less interesting characters.

Superboy: Are they going with the version from the Young Justice TV show?  It looks a bit like that.  Anyway, he spends most of the issue in a tube being studied and then escapes.

Coming next week: I break the habit of a lifetime and read a Judd Winnick comic and wish I hadn't
Posted by Marionette at 3:59 pm No comments:

Email ThisBlogThis!Share to TwitterShare to FacebookShare to Pinterest
Labels: New52

This is my "I'm too lazy to actually review all the new DC comics" post.  What I'm going to do is read most of the comics (Judd Winnick is a step too far) and see if I can remember anything about them a week later.

Action: Superman is young and stupid and catches a train.

Animal Man:  Something about blood and ugly sketchy drawing.

Batgirl: This one I enjoyed, then read some reviews of it and then read it again to catch some of the neat little details I missed the first time around.  Must remember to read next issue twice.

JLI: Almost felt like a full comic.  The team got together and then something bad happened; I forget what.  And Batman was cool.

Men of War:  MEN doing MANLY things.  Shooting at each other, mostly.

OMAC: Forget what happened exactly but it was very Kirbyish and fun.  Will prolly reread when ish 2 comes out to remind myself why I liked it.

Static Shock: Static arrives in New York and has backstory.  And then something happens, I guess.

Stormwatch:  The Moon is the villain?  People are looking for Apollo, and then Midnighter shows up at the end. I'd like to care more about this than I actually did.

Swamp Thing: Alex Holland doesn't want to be Swamp Thing and builds a house.
Posted by Marionette at 8:47 pm 1 comment:

Email ThisBlogThis!Share to TwitterShare to FacebookShare to Pinterest
Labels: New52

Now it all makes sense

I never could understand why it was that Batman's computer gets hacked so often and all his incredibly dangerous secret plans get stolen.


It's because he uses the same password for everything. And it's only four characters.
Posted by Marionette at 12:30 pm No comments:

Things I am not getting worked up over #17: Power Girl

In the newly launched Mister Terrific, Power Girl appears in her civilian identity and does not display any superhuman abilities.

If you don't mind, I'll wait until the fight scene gets started (as opposed to the cliffhanger reveal we got to see in the first issue) before I decide whether this means she has no powers in the relaunched DC universe.

EDIT: I kind of lost track of Mister Terrific, so I'm not sure if Karen Starr ever exhibited any powers in that title, but it's since been revealed in Worlds' Finest that yes, indeed, that was a fully empowered Power Girl.
Posted by Marionette at 8:31 am No comments:

Email ThisBlogThis!Share to TwitterShare to FacebookShare to Pinterest
Labels: Things I am not getting worked up over

Much has been said in many, many blogs about the big DC relaunch currently in progress.  I haven't posted about it directly because I don't have a lot to add.  But I will say this: I'm quite looking forward to it.

Every time a title or character is relaunched, it's another throw of the dice.  And while I have enjoyed a bunch of recent titles, there isn't anything I'm positively obsessive about, that I look forward to every month.  Couple that with several titles that I positively hated last time around, and I'm generally optimistic.

Case in point; while I've been a fan of Supergirl since before I could read, I hated the last model.  The origin was terrible, and only part of a ghastly story that failed on multiple levels, and the series that followed it went through creative teams every couple of issues, with no consistent characterization.  I've heard recently that it did eventually find its feet, and even the dreadful and inconsistent backstory and characterization was explained away and rationalized.   But that's still around forty issues of baggage, not to mention the period where the comic becomes a fourth Superman title.  So as far as I'm concerned, the bar is set pretty low for Supergirl to do better next time.
Posted by Marionette at 8:14 pm 1 comment:

There was something that bugged me about the cover of the first issue of the new Justice League, other than the bland new logo and the generic image.  Now what was it? 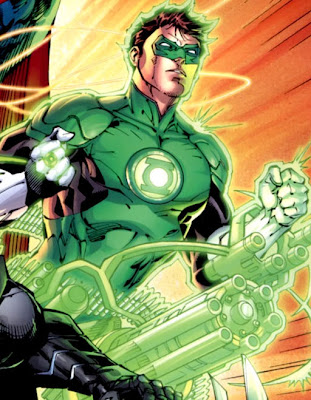 Oh yes, Green Lantern's massively weaponized Codpiece of Doom.  Created by his magic Ring of Overcompensation.
Posted by Marionette at 12:27 am 1 comment: