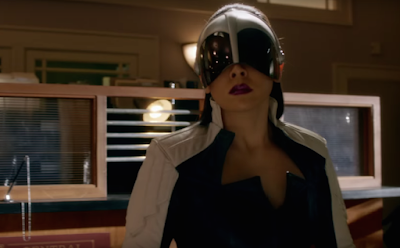 So Doctor Light made her appearance on The Flash and I have somewhat mixed feelings. I mean yay, Doctor Light appeared on TV, but boo for just about everything else.

Now obviously they had to find some way of simplifying the character's tangled history, but they did so by simply conflating the two Doctor Lights as one character (which is all kinds of squick if you think about it at all) by making her a female villain. They also changed her civilian identity from Japanese Kimiyo Hoshi to Linda Park (played by Chinese American Malese Jow), Barry Allen's blink-and-you'll-miss-it girlfriend from last year, and Iris West's collegue at Central City Picture News. She's given no backstory, and she's basically just a villain of the week in an episode where fighting the bad guy was distinctly the B-plot.

Also undeveloped to the point of whatever-was-required-by-the-plot-and-no-more was Doctor Light's powerset. "Something something powered by star-light" translated into throwing big light flashes and occasionally doing some kind of blowtorch effect.

Even Flash's final confrontation with her seemed very forced. They made a big deal about him working out how to distract her with visual echoes, but A) she'd already shown she could beat that with a big area effect zap that she'd used twice before but somehow forgot about here, and B) the only reason he did this was so that he could get behind her and bop her on the head, which he could have done at any time by running really fast, which is kind of his core skill.

This isn't the first time the show has taken the name of a character from the DC universe and applied it to a disposable, virtually generic villain, and it's always a little disappointing, particularly on a show that does so well when it does make an effort. I don't think I'll mind if this rather poor copy of Doctor Light doesn't recur.
Posted by Marionette at 6:50 am No comments: