It started with Everquest. You'd choose a name and then at level 20 you could get a surname. The official name policy said you couldn't pick a name from popular culture like James Bond, so I'd think of creative ways to get around it. I'd come up with names based on movies like Tamara Neverdies or Diane Otherday.

I notice that a lot of places in the UK will now list useful stuff clearly where it is easy to spot about calories, salt/fat content and suchlike, but what really annoys me is that often where they list the calories the small print will say *per half can, or in the case of some desserts *per 1/6 or some such.

What the hell? If I am interested in the calorie count for an item I want to know how much the whole lot contains, not how much I will get if I share it with six friends (like that's going to happen). Give me the total or just forget it.

And what's even stranger is when I find non-slimming branded items that contain less calories than the slimming ones. What's that about? Why not mention this somewhere to save us slimming types time?

Of course the true secret of slimming can be simply summarised:
Eat less
Exercise more.

Personally I'm working on both. Which involves a lot of salad (which I happen to like), Tai Chi, and getting vertigo running accross Clifton suspension bridge, but it's a pain picking up some tasty morsel thinking I can eat it without guilt only to find I can eat 1/4 of it before I have to feel bad.
Posted by Marionette at 9:26 pm 2 comments:

I'd read the first couple of issues of Y the Last Man and thought it looked interesting, and I'd been thinking of picking up the collected editions, but hadn't got around to it yet, so when I saw issue #40 sitting in a bargain bin I picked it up. 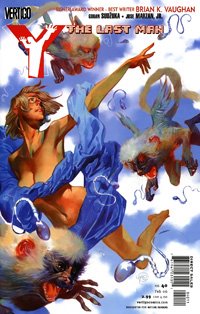 Turns out this was a good issue to grab at random as it is pretty much a stand alone story, and I am even more encouraged to get the collections, but there was one bit in it that knocked me sideways slightly. In the story one of the characters reveals that she had been a member of a modern amazon group. She does so by displaying the mastectomy scar where her left breast should be. This confused me for a moment because the historical amazons didn't cut off their left breasts. They didn't even cut off the right ones.

Whether the writer Brain K. Vaughan had been taken in by the myth, or if he was just saying that the women in the story had been, I don't know. Maybe that will become clearer when I get to read the rest of the story.

You see it's all based on a mistranslation. According to Wikipedia:

The Greek variant of the name was connected by popular etymology to privative a + mazos, "without breast", connected with an aetiological tradition that Amazons had their right breast cut off or burnt out, in order that they might be able to use the bow more freely (contemporary Greeks drew the bowstring to the sternum); there is no indication of this practice in works of art, in which the Amazons are always represented with both breasts, although the right is frequently covered. Other suggested derivations were: a- (intensive) + mazos, breast, "full-breasted"; a (privative) and masso, touch, "not touching" (men); maza, a Circassian word said to signify "moon", has suggested their connection with the worship of a moon-goddess, perhaps the Asiatic representative of Artemis.

According to the myth the Amazons remove their right breast for a practical reason - to make using a bow easier. The modern Amazon would not be so bow-dependant, and even if she was, champion bow-women seem to manage without resorting to surgery. So a modern Amazon could only be following this non-existant "tradition" for purely ritualistic purposes.

Which seems an awful lot of trouble to go to because of a mistranslation.
Posted by Marionette at 10:48 am 8 comments:

Okay, it's not really a competition, but I have a free 14 day trial to City of Villains to give away so if you are interested, drop me an email (mari at blueyonder dot co dot uk) and tell me why you'd like to try COV. It doesn't have to be witty or clever, I'd just like it to go to someone who will really enjoy it rather than someone who just likes getting free stuff. Heck, maybe I'll even show you around the place.

Note that while COV doesn't require quite the top end machine as some online games, this will involve downloading something like 1.5gb.

Update: They sent me another one so I now have two free trials to give away.
Posted by Marionette at 7:27 pm No comments:

How could I forget? 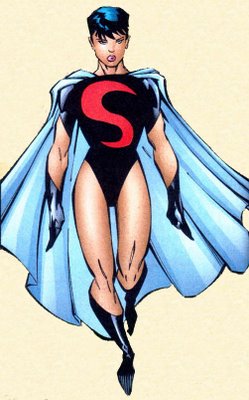 Okay, so I'm running a bit late on this one, but here it is at last.

There is a difference between costumes that are merely inappropriate - either not suited to the particular person wearing them (although they might look fine on someone else) or to the setting of the story (eg. space suits that include either miniskirts or bikinis) - and the truely disasterous that would look hideous on anyone.

Flower from Kamandi wears a torn red skirt and no top, and appears to have her long hair stapled to her chest. While this is entirely consistant with the circumstances of the story, you have to wonder why Kirby chose to have a female character running around topless in a comic where sight of a stray nipple would be strictly forbidden, requiring such a clumsy device to keep her decent. 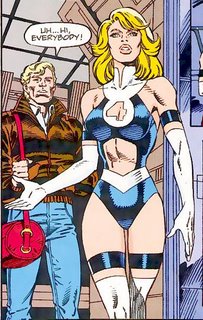 A typical way of showing when a good female character has gone bad is to put her in some kind of bondage/fetish costume. A prime example is Sue Richards of the Fantastic Four, whose repressed urges were released when she donned the fetish costume of Malice. It is actually a very good story empowering the Invisible Woman, unlike the semi-sequel where the return of the Malice persona is signalled by Sue taking a pair of scissors to her regular costume and cutting a lot of holes in it, and then biting the head off anyone who comes near her.

Costumes with only one pants leg never work, even when drawn by Alan Davis.

Not many comic characters could pull off a tailcoat and fishnets, but Zatanna only works if that is what she is wearing. As a stage magician it is entirely consistant for her to wear such an outfit

and it's only when they try to make her look more superheroey that it all falls apart. In the recent mini-series Grant Morrison puts her in a variety of absurd cheesecake outfits but they work because they look like stage costumes, 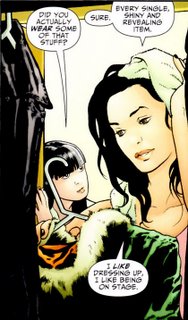 wheras the two she wore while an active member of the Justice League completely jar with her personality.
Posted by Marionette at 10:19 pm 4 comments: 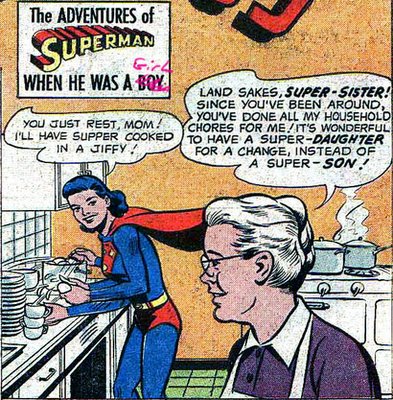 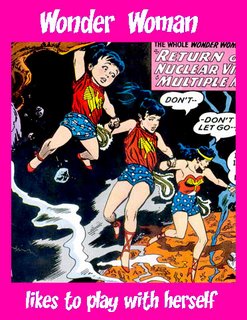 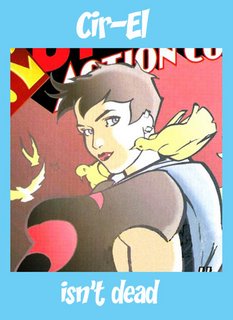 As the Silver Age waned DC went through the first of their periodic shake ups to revitalise their characters. But unlike later attempts, this was not any kind of co-ordinated event, as it required no retconning, and each editorial team within the company took a different approach.

For Supergirl this involved an intermittent depowering similar to what was happening to Superman at the same time, but more importantly it involved her quest for a new costume. 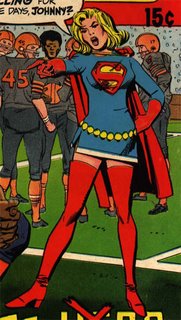 Kara had been wearing the same old dress since 1957. It had never gone out of fashion because it had never been in fashion, but changing it was a big deal because at this point in history no established superhero had ever changed the design of their costume (Wonder Woman doesn't count, since she stopped wearing hers altogether). DC promoted this with a big competition among the readership of Adventure Comics, and in Adventure #397 she got a new outfit designed by Diana Prince (Wonder Woman), though I'm not sure I'd be taking practical fashion tips from a woman whose idea of clothes fit for street fighting and action adventure were exclusively coloured white.

Despite the announcement that Supergirl would now be seen in a variety of fan-designed costumes it would be a year before she changed again (Adv #407), when the scientists (scientists?) of Kandor had finished running up a wardrobe full of monstrosities. 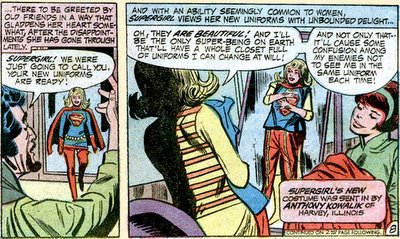 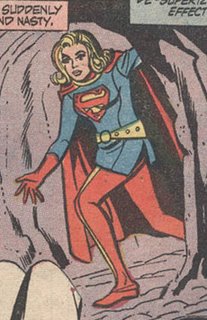 For reasons unknown, Kara's first choice of the scientist designed costumes is one of the worst. The red tights were apparently a colouring mistake (who would know?) since they are changed to blue in the next issue. Sadly, the pixie boots remain and one can only assume these were done on purpose. 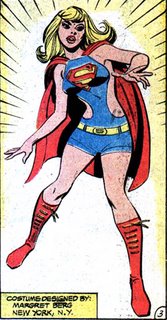 Of course the new costumes had the advantage of remaining invulnerable even when her powers faded, which came in quite handy when she got dunked in acid in #407, so it makes you wonder what the thinking was behind the backless, sideless, sleeveless, legless number she wore in #409.

In Adventure #410 she first wears the hot pants number that would see her through the 1970's, and although she continues to try out alternatives until #415, this is the only one that recurrs. 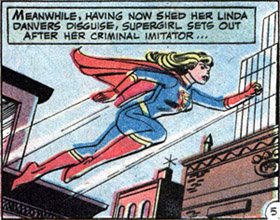 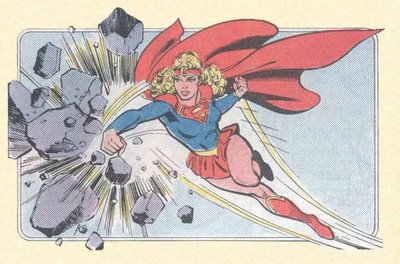 It was only changed again in the 1980's for the Olivia Newton John cheerleader look that she died in fashion-wise long before Crisis.
Posted by Marionette at 10:09 am 4 comments: 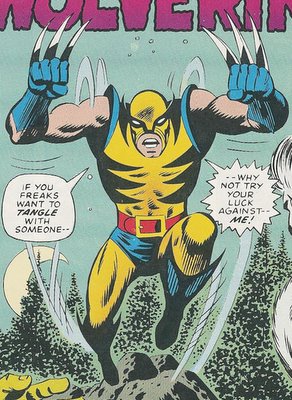 Fans with way too much time on their hands have speculated at length about Wolverine's original yellow costume. "What was he thinking?" they cry, hypothesizing about primary colour theory and various other overcomplicated notions.

It's really so much simpler.

What Wolverine was actually thinking was this:
"If I wear this stupid yellow costume with the ridiculous ears then people will make fun of me and I will have an excuse to hit them."
Posted by Marionette at 10:16 am 3 comments: