It's been four years since your last Superman Showcase collection,  and three since your last Superman Family*. I enjoy these collections a lot and I have supported this line by buying all the volumes you've released that interest me, reviewing them, and blogging about the ones I particularly enjoyed, but I'm tired of waiting, so I'm going to go read scans of the comics that would make up subsequent collections while I'm waiting for you to get around to publishing them so I can give you money.

*Okay, I see there's a new Superman Family due next year. If I start blogging about the stories in it now you can consider it a really early review.
Posted by Marionette at 1:54 am No comments:

There's an established point of culture that wearing a red shirt in Star Trek (the original series) is the mark of doom.  I recently came across this entertaining statistical analysis of this phenomena, which does indeed bear out the assumption, showing that 73% of all crew member deaths occur to those sporting the fabled red shirt. It also does some other entertaining statistical analysis of red shirt death.

The only element I was disappointed not to find was what proportion of red shirts overall died. After all, the 73% only stands out if you assume that shirt colour distribution is equal. If the majority of crew were red shirts then it would would be expected that the majority of deaths would also be red shirts. And considering the rate they got through them, that's not an unreasonable assumption.

And yes, I guess I could go watch every episode of the show and count them myself, but I don't honestly care that much.

Actually I realise it's impossible to work out what percentage of the crew were red shirts (unless it's listed somewhere in a book or something). The analytical study assumes a stable figure of 430 crew, but this fails to take into account all the replacements transferred in for those killed in action. Also, since we never get to see the entire crew, we can't tell how many of them are red shirts, but assuming that the division of shirt colour is roughly equal among the crew, there would be more red shirts in total because whenever someone dies they are replaced by someone with the same shirt colour and red shirts die the most.

So it remains that in simple numbers red shirts die far more often than other crew members, How statistically significant this is may be impossible to tell, but while it's less significant than simple numbers suggest, you're still better off in blue.
Posted by Marionette at 3:17 am 1 comment:

The Problem with Comics

Quite simply, the big problem with comics right now is too little content for too much money.

Currently a typical mainstream title costs £1.99. (UK currency) One issue will typically give me one quarter to one sixth of a story, and will take perhaps ten to fifteen minutes to finish.

I confess to having a short attention span. When I'm reading a story in 22 page chunks it doesn't take too many months before I've lost track of who all the characters are, what they are doing, and why I should care. I recently read the first ten issues of the new Ultimate Comics Spider-Man. I enjoyed it, but I don't think I'm going to keep following it.

Why? Because it took five issues to get Miles Morales into the costume. Another five issues and we haven't even finished the opening story. It's entertaining but the pacing is positively glacial, and it's just not good enough to hold my interest while it takes years to parcel out the story in such tiny bits. It almost feels like a cheat to produce this in monthly comic form at all; it would read so much better as a 120 page trade paperback put out twice a year.

Now consider I also have a subscription to The Magazine of Fantasy and Science Fiction.  It costs me £2 per digital issue, which will give me something like one novella, four novelets, four short stories (all complete in the issue), and assorted review and commentary columns.  It typically takes me more than eight hours to read, spread over a week or two.


You see why I'm not reading many new comics these days?
Posted by Marionette at 2:39 am No comments:

Stop Lex Luthor from dominating Metropolis in the Lego Superheroes Superman VS Lex Luthor's Power Armour set. Luthor has built a kryptonite powered suit of armour, complete with kryptonite laser beam. Can you dodge the beam, rescue Wonder Woman and save the day? Includes Lex Luthor, Superman and Wonder Woman minifigures, as well as a bonus comic.


Really, Lego? You're making Wonder Woman a victim to be rescued, now? I swear, lately it feels like we are further from equality now than we were twenty years ago.

Posted by Marionette at 3:31 am No comments: 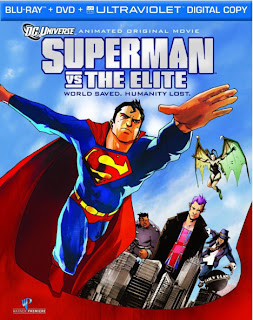 Superman Vs The Elite
Action Comics #775

Wherever comic fans gather at some point there will be a discussion over who would win in a fight between any two given heroes. The truth is that it depends entirely on who is writing and what comic it's in.

The original comic that the new Superman OAV is based on Superman Vs The Elite took thinly disguised caricatures of Warren Ellis' superhero supergroup The Authority and pitting them against Superman, in what was essentially a fight between the classic DC style and the overblown 1990's Image style. As this was a Superman comic, Superman wins, and teaches a moral lesson about restraint and the rule of law.

The video was written by Joe Kelly, who also wrote the original comic, and the larger canvas gives him much more room to expound on the concepts in the comic. Sadly, he doesn't do this by making the message more subtle or exploring it more deeply, so much as having characters stand around and deliver speeches. It's very obvious and preachy, and you can practically see the big neon sign flashing 'AUTHOR'S MESSAGE' everytime it happens.

There is little that has been added to the story that isn't dreadful. Menagerie, the lone female member of the team, has gone from having no personality or dialogue to cliché sexual predator. Manchester Black's origin appears to have taken place in Victorian London, with everyone speaking atrocious mockney, but it does result in something I never expected to see; Superman calling someone a wanker[1].

The one bright spot is the dialogue between Supes and Lois Lane, which is witty and clever. Their relationship is spot on, which only serves to make their light, intimate scenes bizarrely out of place in such a heavy-handed, preachy melodrama.

The Elite are Kelly's straw men, displaying all the worst qualities of the 90's Image Extreeeeeme style[2]. Which rather makes it odd timing to produce an animated version, when the reinvention of DC has given us a Superman whose philosophy is difficult to distinguish from the bad guys in this movie. Arguably you couldn't even write The Elite in the new DC; their power to shock for their extreme stance loses all its power when Superman and Batman are bahaving as badly as they are. 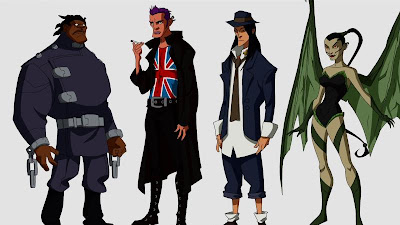 Notes.
1) A much more offensive term in the UK where we know what it means.
2) Apart from the pouches. All 90's Image-style characters had pouches everywhere.
Posted by Marionette at 9:15 pm No comments: