I was going to do something to mark the birthday of Jack Kirby, and then it was too late, and then I thought what the hell, I'd do it anyway.

There's this one panel from Tales of Asgard that really sums up everything about Kirby to me. 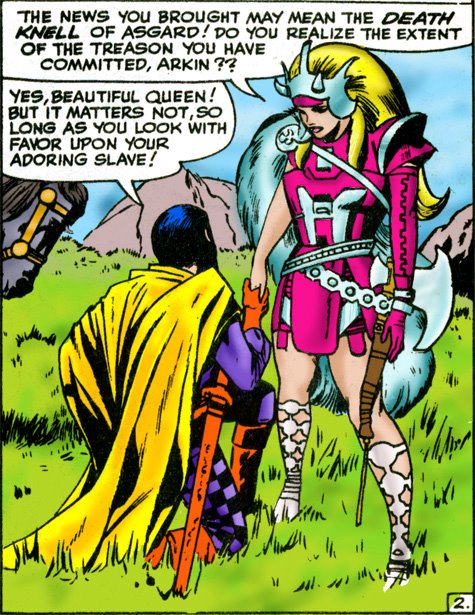 It's Knorda, the Normal-Sized Queen of the Mountain Giants*. She appears in one episode of Tales of Asgard, back in Journey into Mystery #109. But what she epitomises to me is how much Kirby cared about his work. He could create comics at a rate almost unheard of today, and yet even throwaway characters who only appear in a couple of panels, like Knorda, have their own style and personality.


*Yes, I know I've posted this panel before. I really like it.
Posted by Marionette at 8:41 pm No comments:

I used to enjoy all the little pop culture injokes and references in the stories I read or watched, but these days it's feeling a bit done to death. I think a lot of it maybe has to do with the way so many movies now are retreads of what's gone before, either sequels or remakes, while comics are lost in finding 'iconic' versions of themselves, which translates loosely as two parts silver age, three parts 90's extreeeeme in the case of DC, but again results in the rehashing of old stuff. And instead of building on their rich heritage to tell new stories in a well defined universe with a strong history, they relaunch a messy do-over, where some titles follow established continuity while others have restarted from scratch, and no one seems to have any clear overview of how it all fits together. And that's when they're not pilfering Watchmen to create all sorts of new material that are supremely irrelevant to the work they are based on, because the original was complete in itself.

And then you get fan stuff, which takes the concept of a throwaway pop culture reference and expands it beyond all sense of restraint to stealing entire scenes from movies and repeating the script word for word, as the Nostalgia Critic has been doing lately. Lifting five minutes of dialogue from The Search for Spock without adding anything original (beyond the production values of a school pantomime) IS NOT FUNNY. The sequence itself is boring because you know exactly what is going to happen, so then pointing out that it's a reference, when we'd worked that out ourselves five minutes earlier because it's one of the most iconic moments in the history of SF movies you are making a shabby copy of is also NOT FUNNY.

It doesn't help that the majority of these in jokes are referencing the same old classics that everyone else references. Entire generations have grown up knowing the original Star Wars movies, not from watching the films, but from seeing choice bits of the script endlessly recycled in everything from kids' cartoons to political satire.

Kirby grunted and said, "This kid doesn't get it. The Kirby tradition is to go create a new comic."
Posted by Marionette at 1:25 pm No comments:

The comedian Louis C.K. does a great routine about white privilege, part of which talks about time travel.


Which may be funny, but is not strictly accurate.

Sure, Europe between the 16th and 18th centuries would be problematic, to say the least, and America up to the 1960s (or later), but while a black person earlier than that in Europe might be considered exotic because of their rarity, they would not be actively discriminated against. There are records of black people living in England that go back many centuries before the slave trade without evidence of discrimination.

And then again, if we assume the white person with a time machine is an English speaker, there are plenty of times and places where he would be unwelcome, liable to be pressed into slavery (it's never been just for black people), or shot on sight for being English.

Women, on the other hand, are stuffed. Doesn't matter what race they are, without some man to support them, they'd be considered property most times and places prior to the twentieth century.
Posted by Marionette at 10:03 am No comments:

Having cake and eating it beforehand

It's blogiversary time, being seven years since I started this nonsense, so I thought I might mark it with one or two musings on the subject of time travel.

At the end of the first Superman movie, our hero is faced with the dilemma of either saving a whole town, or saving Lois Lane. Spoiler alert: He does both. But how he does it is interesting.

First he saves the town.[1] Then he rushes off to save Lois, but Tragedy! He's too late, and she's dead. So he flies up into space and starts whizzing round the world.

He is not making the planet spin backwards, as some people seem to believe. That would be stupid. He's just accelerating past the speed of light, which causes him to go back in time,[2] which makes it appear that everything else is going in reverse. I don't know why this is confusing. It always seemed obvious to me.

Anyhow, he's gone back to the point where Lois hadn't died yet and rescues her. Yays all around.

the question that I don't think is ever addressed is; does this mean that he now hasn't saved the town? Has him appearing in the past overwritten the previous timeline? Or are there now two Supermans at this point in time? And if so, what happens to the spare?

For the sake of argument, let's say that the Superman who saves the town goes back in time to save Lois, even if she has already been saved before he leaves. That way there is only ever one Superman, it's just that his timeline is a bit tangled.[3]

Of course once you've established that you can always fix stuff later, it all gets a bit Bill and Ted, except worse. Bill and Ted time travel never overwrites an incident, it just allows our heroes to decide to have done something, and then subsequently go back in time to actually do it. They don't cheat. Ted's dad's keys are missing in the movie long before B&T decide to take them, so they will always have stolen them. The timeline is not changed. When Superman goes back in time he adjusts the timeline so events happen differently.

Which means that not only can Superman go back and change any event he doesn't like, he can be in several places at once. He can oversleep, and then go back in time and still get to work on time. He can be defeated by Lex Luthor, but so long as he escapes afterwards to go back in time, he can get a do over until he gets the best outcome. If necessary he can go back and destroy Luthor's Big Zappy Gun of Doom and at the same time defeat Luthor himself at a different location, and also stay home to watch the Superbowl, if it happens to clash and he's into sports.

The downside is that he ages at the same rate, whether he's going backwards or forwards in time, so if he overdid this kind of thing he'd getting older than everyone else because of all the side-trips he was making, but Superman doesn't seem to age at a normal rate so it probably wouldn't show. It might also get a little confusing after a while, so I imagine his To Do list would get complicated.


Notes:
1) it's been a long time since I've seen it, so the details elude me.
2) Though you'd think it would be difficult to fine tune how far back you went at that kind of speed, even for the Man of Steel.
3) And let's not think about the original timeline, where she isn't saved, that sets the whole thing up.
Posted by Marionette at 9:36 pm 1 comment: