The lunar month around the month of April in the Julian calendar was called the Eostre-monath. And as the Christian tradition of Easter, which has also fallen in April, arrived in some Germanic-speaking regions, the people named the then-unnamed Christian day after the festival, that is, in English as Easter, and in German as Ostern.

In ancient Anglo-Saxon myth, the goddess Eostre (AKA Ostara) is the personification of the rising sun. In that capacity she is associated with the spring and is considered to be a fertility goddess. She is the friend of all children and to amuse then she changed her pet bird into a rabbit. This rabbit brought forth brightly colored eggs, which the goddess gave to the children as gifts.

Happy Eostre everyone!
Posted by Marionette at 3:10 pm 5 comments:

apparently it's First Comic Week so I'm trying to remember back that far. To be fair it's almost certain that the first comics I read were british, but the majority of people reading this wouldn't have heard of them even if I could remember what they were called, so I'll keep it to the first american comics I encountered. 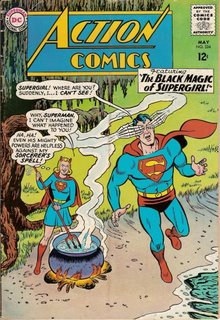 I don't know how old I was, but it was at a point before I could read when I came across a stash of comics belonging to (I think) a relative. I don't really remember the details, but I was attracted to the colourful and exciting pictures, which were so much more dynamic than anything available locally. One of the comics here may have been Action Comics #324. I couldn't say for certain, but it's the earliest comic I remember.

There was something about Supergirl growing horns and becoming evil that stuck with me. That and the issue of Wonder Woman where she grows to giant size and eats a big pizza. If I had an analyst they'd have a field day.

Is it any wonder why I have a thing for silver age DC?
Posted by Marionette at 12:39 am 1 comment:

The act or an example of substituting a mild, indirect, or vague term for one considered harsh, blunt, or offensive: “Euphemisms such as ‘slumber room’... abound in the funeral business” (Jessica Mitford).

In comics (and other pop culture media) we often see a kind of symbolic euphemism; on the good side, allegory is used to address emotive issues by giving them a fantastic context, for example a racial issue might be played out amongst different shaped/coloured alien beings. On the bad side this is used to sugar coat unpleasant things to make them acceptable, thus robots are often used as antagonists that can be safely torn to pieces without any moral questions raised, and female characters can be made pregnant against their will without all the unpleasantness of having them raped.

When Power Girl announces that she thinks she's pregnant in Justice League International #52 it's a bit of a surprise, not least to her. 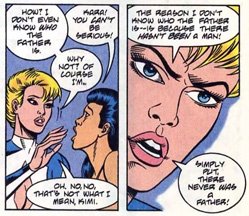 Over the next year there is very little visible sign of Power Girl's pregnancy (although it's a little hard to tell at times given how dreadful the art gets on occaision) and she continues to wear the same ghastly spandex outfit and get into fights. And then suddenly between JLI #67 (August 94) and Zero Hour #3 (Sept 94) she swells up like a beach ball having an alergic reaction and changes into a polo neck sweater.

Everyone else runs around and hits stuff, and Wonder Woman gets to tell Captain Atom to piss off while she delivers the baby. The only things wrong with this scene being that Diana grew up on an island that had zero population growth and has no experience of dealing with a birth, while Captain Atom explains that he helped deliver his own two children. You'd think she might at least think to get Karen a cushion or something, but the only pictures we see of her between this point and after the birth show her flat on her back on what appears to be a hard shiny floor, with no support of any kind.

And the next we see of her, the baby is born and all the messy stuff has been cleaned up. In fact she only appears for two small panels in the last issue of Zero Hour, and by the time we see her again in the following month's JLA #93 she has regained her figure and the child looks about a year old. The plot then kicks into gear as we meet the villain of this story and Arion shows up and explains that he was responsible for getting Karen up the duff. And I don't care how noble his cause was, or what mystical euphemism is used, getting your granddaughter pregnant without her consent is not okay, and the way it is treated here is pure misogyny (as is most of the storyline, for that matter). 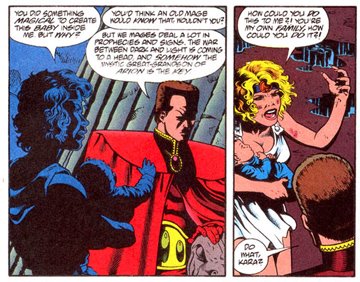 Even under all the fantasy bullshit they can't get away from admitting that Karen has basically been raped by her own grandfather, so they just gloss over it as fast as possible and get back to the fighting.

In fact it gets worse. By the climax of the storyline it is revealed that Karen's entire life has been orchestrated purely to produce Arion's "mystical great grandson". Until this point she has had no true free will as she had simply been programmed for this purpose, her whole life directed by Arion and his mystics.

It is an utterly repellent and misogynistic storyline, written entirely by Gerard Jones (except for the few brief panels in Zero Hour), and in no way enhanced by a variety of terrible artists. I gather it had been written out of continuity even before Crisis 2 erased the whole Arion aspect of Power Girl's backstory. But brushing it under the carpet doesn't mean DC can pretend it never happened.
Posted by Marionette at 5:17 am 6 comments:

Although I didn't start this blog until August, as of today I have been blogging for one year. I used to hang out on a comics based message board called Z-Cult FM, and every so often I would go off on a rant or write some lengthy essay about Wonder Woman's boots or like that. When the Cult set up a blog system of its own I thought I could use it to collate and archive all this stuff I was writing because I was quite pleased with some of it and didn't want it just disappear, not to mention all the time and effort I'd put in to researching stuff.

Don't worry, you're not missing anything. I reposted anything worth reposting here.

Anyhow, I was pleased with the result, but found that even though plenty of people were reading it, I hardly ever got a response, where the same thing written in one of the forums might prompt several pages of discussion. I started looking around for a way to find a larger and more responsive audience, and it was then that I stumbled across this little corner of the blogosphere. I forget the exact details, but I think I followed Sleestak. He had been running a version of the wonderful Lady, That's My Skull at Z-Cult, but soon filled up his allowance for pictures there and so started the Blogger version. At least I'm assuming this was how it happened, I'm sure Slee can correct me if I'm mistaken.

It was then I discovered some of my favourite blogs, like The Absorbascon and Dave's Long Box, which I still read regularly, and decided to set out my own stall here. Hard to believe after all this time I still haven't finished reading Wonder Woman v1. I really must get back to that sometime.
Posted by Marionette at 10:43 am 6 comments: