I've always considered it a mark of pretentious intellectual oneupmanship when someone says that they are reading whatever the text under discussion might be in the original language it was written in. In most circumstances where this is applied to philosophy, literature, religious texts, or whatever it might be there are usually perfectly good translations available that are entirely adequate for most purposes (I make an exception for poetry here; while a translation might have a beauty of its own, it cannot be the same as the original). 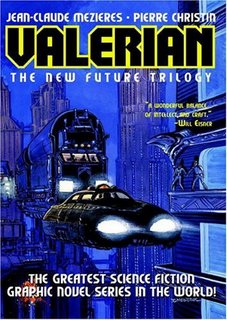 So it is with a degree of selfconsciousness that I find myself brushing up my school french in order to read the series of french Valerian graphic novels. But my patience has run out.
Some years ago four volumes were released in english that gave a taste of this fun and wonderfully drawn series, and now after years of waiting for more what we get is Valerian: The New Future Trilogy. Now to be a little pedantic I have to point out that this is not in fact a trilogy in any sense of the word, just 3 self-contained sequential episodes of the much longer series. But the really frustrating thing is that after such a long wait to see this series the translation is so poor.

And by poor, I mean it's so bad that I am not only saying "I could do better than this crap" but I am actually going out and buying one of the untranslated volumes and doing so. I had been intending to start at the beginning and work my way through in chronological sequence, but due to a slight confusion I ended up getting volume 2 on ebay instead of volume 1. Ah well, if I get anywhere with the project I can always do that one next. After all I've already read volumes 4, 5, 7, 10, 13, 14, & 15.

I'm just waiting for the book to be delivered, but I'll let you know how I get on. In the meantime I'll maybe review the volumes that have been translated. I already did a brief piece on The New Future trilogy over at Comics Should Be Good, but it's a good excuse to reread the older books.
Posted by Marionette at 7:35 am

I think a translation must be a bit different from the original. If one translation was just as good as another, we wouldn't have hundreds of different translations of any Christian Bible (without even considering differences that arise from different books being included).

I'm not fluent in any language (well, maybe English), but I often find myself annoyed when I'm watching foreign films in languages I somewhat understand. Frequently I'll find the subtitles take an expression that's common in the language of the film and translate it into something that sounds stiff or formal in English. You lose bits of characterization that way. Other times they'll leave out information that's being said...I guess so it reads quicker on the screen.

I'm certainly not against translations, but I think the best you can hope for is that you have a translator who's something of an author himself. Someone who will translate the essence of what's there, paying most attention to things like characterizations, which are conveyed through methods of speech and can be the hardest things to translate. Such a translation might even be better than the original (if the translator has a better grasp of such things than the original author) but it will never be exactly the same.

Weird, I was going to post today about reading a Corto Maltese book that was horribly translated.