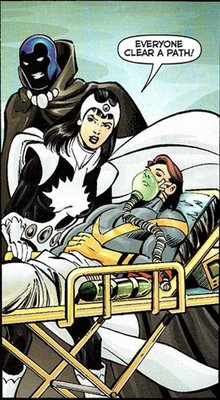 First chronological appearance of Doctor Light II since her depowerment (officially 52 #2). It's only one panel, but she's in costume.

So my guess that the resolution to her depowerment story would occur in 52 is now completely busted (as they say on Mythbusters). Will we now even get to see Kimiyo's big comeback story at all? My magic 8-ball says "Outlook not so good".

Okay, the original story was bad in so many ways, but is Judd Winick's tawdry little opus simply going to be quietly ignored? Are those few fans who were emotionally moved by their heroine's plight now to be told "Get over it; it didn't happen"?

Not to mention it would be such an opportunity to produce a hugely empowering kick-ass story about a character coming back from the brink of death to confront her abuser and take back her power and her name.

I really want to see that story.
Posted by Marionette at 6:18 am

Well there's always a flashback story somewhere. I mean seriously they CAN'T just IGNORE that whole "She doesn't register with a Meta Gene" thing. But for all we know this could come into play with whatever Geoff has planned for her (remember he's admited he has MAJOR plans for characters and she's one of them)

And there's also always Gail too.

I think she is just one of those heroes who always wears their costume, on duty or not.

Yeah but why would she wear it without powers? That's where she was left off with in GA #54, and people would assume she'd still have them (at least in this case because I don't see GA or Black Lightning, the only two who seem to be the ones who know heroes wise) and expect her to use them in the situation (a rescue one to save those who lost their powers)

I think you are right about the resolution. DC likes having Winnick around for some reason, so they are just going to pretend it didn't happen rather than write a potentially great story to undo the mess he made.

Of course by doing so, they leave everyone with a bad taste over what happened. If they had done the kick ass redemption/revenge storyline, that would have been the lasting memory of the storyline.

We have this heroine who was once one of the most powerful heroes in the DCU. She's been stripped of her powers, knocked down but not out. She has always been cold and distant as a hero, so probably thinks no one would come to her aid. In fact, she would most likely never even reach out for it in the hero community. Eventually though, she learns a bit about being a hero as she sees other heroes step up to help her despite her distance. Eventually she is repowered and seeks revenge. The revenge could go either way, do the right thing by superhero standards, or she could kill Dr. Light, either option could serve the story well.

An interesting twist would be to have it happen in an arc in Supergirl, or a Supergirl/Dr. Light mini.

As I understand it, with the changes of Infinite Crisis, many heroes now remember the original crisis. Previously, I think only Dr. Psycho and the pocket unverse folks remembered everything from the Crisis on Infinite Earths. Now though, it seems many people know.

In that story, Dr. Light contributed in a small way to the death of the original Supergirl, and was inspired by her sacrifice to be a hero. It would be interesting to see her be helped by Supergirl, knowing full well what had happened previously.

Additionally, she could pass on knowledge of the selflessness of the original Supergirl to the new one, helping her come to terms with her own heroic legacy.

Sorry, I wrote a lot here, but I have been thinking about Dr. Light a lot lately. I would really like to see DC do right by her.

I always wondered how would Kimiyo (who DOES remember the crisis too...given how she remembers facing an Anti-Matter god in her showcase 96 solo adventure) react to the current Kara Zor El.. I mean seriously, she'd be like "Wait you can't be alive" And such.

Wouldn't it be nice if she used, I don't know...a knowledge of physics to take him down? Totally out-thinking him and taking him apart bit by bit...she is my second favourite physicist in comics, now Alice Hawking (Thrillkitten) is back!

No offense, but I'd rather have Judd Winick's story completly retcon. However, it wouldn't be a quiet retcon. It would be a loud retcon. Basically, Light I is like "But I took your powers" and Light II "is what are you talking about? You're a moron!" Thus undoing both Winick and Meltzer and shoving it in their faces!

Actually I believe that she also appeared in a much earlier issue of 52. It's a crowd scene, and she's talking to Guy Gardner of all people. This is before Booster bit the big one.

I think DC is doing a quiet recon and just hoping everyone will forget about the story - like they did with the stories right before Zero Hour where Oliver Queen was shooting land-barons in the chest and helping Anarky to blow up gun factories.

Sally, I've explained the whole convoluted mess before. She did appear in 52 #1 so they said (on the official 52 website) the GA story took place during week #2.

I would like to see more Dr. Light II (Electric Boogaloo) in general. I love DC, but they've dropped the ball with this character SOOOOO many times, it's just sad. I did like seeing her as part of the invitees to the Birds of Prey and would LOVE to see Gail Simone write this story of which you and I would love to see of this heroine courageously coming back from the brink.

Not only that, but it turns out Booster's not dead.