What time is it, kids?

It's time to indulge my obscure fannish interest in a character nobody else particularly knows or cares about. 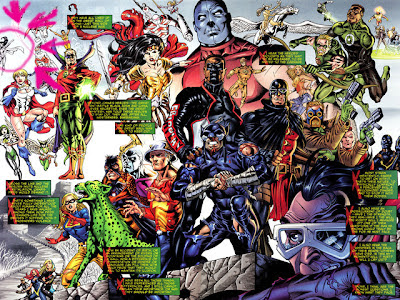 I'm happy to see her here for three reasons:

1) Including her in the group, even without any dialogue and at the back of the crowd establishes that she is an active character in the DC universe. 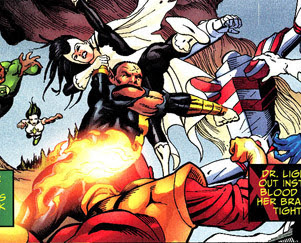 2) She fights Black Adam and doesn't die - always a risk for a female C-list character as it's contractually required that a villain in an event comic has to kill at least one less popular character to show how badass they are because killing millions of innocent bystanders clearly isn't good enough. This time it was Terra who got the bullet, but she goes through lives like a video game character, so it's hard to get too worked up about her.

3) It's the first time we have seen her in action since she was depowered and left for dead. Okay, she's been referred to elsewhere, and cameoed in Birds of Prey in civvies, but this is the first we've seen her powered up. And okay she doesn't fare well against Black Adam, but he was trashing everyone that day.

Fingers crossed, as always, that she gets a more profile gig sometime soon. Just so long as it's not in The Outsiders.

Posted by Marionette at 4:06 pm

Yay for you and Kimiyo!

Hey, why is it that whenever I think of this character, I imagine her drawn by Don Heck? Did he do some of her earliest appearances?

The most interesting thing is, the way she is taken down (Black Adam grabbing her by the neck and squeezing ONLY just enough to cut the blood to her head and thus instantly blacking her out) you have to take into account this WOULD have been yet ANOTHER opportunity for DC to have killed her (the first being GA #54) but, once again, they didn't do it. So what's going on with DC is crazy

Is that PlasticMan in the bottom right of the first pic? When did his goggles become breakable? Hell when has he ever bled before?

I'm surprised that Black Adam didn't swing back and break her in half like what seems to happen to every female character involved in a scrum with a super powered villain in an event >.>;;

But it's a sad state of affairs where just NOT DYING is an accomplishment for a female character in a DC event :(