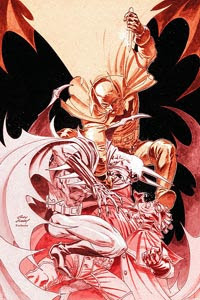 Or, I don't know, maybe one of those tedious threads that crops up on every comics message board before long where people debate who would win in a fight between hero X and hero Y, and you know it doesn't matter how carefully they analyse the relative powers and skills, it all comes down to what story the writer wants to tell.

Or it could be a videogame. One of those dull fight games where the plot is just a thin excuse for the fighting. It's like watching someone else play one of those.

Plus DC get to kill off a whole bunch of Elseworlds characters that were minding their own business.
Posted by Marionette at 9:30 am