I always liked Triplicate Girl, even though she was useless. In a club where everyone has to have a super power, her power is to turn into three girls with no powers. And yet somehow nobody ever brings this up.

Of course her powers are actually tremendously useful. It's just she never gets a mission that would take proper advantage of them. Imagine how great she'd be in a covert operation: she can be in two or three places at once! She could be having a conversation with the evil overlord, while at the same time rifling through his panty drawer. And eating pizza.

There are great stretches of Legion stories I haven't read yet, so it may be that someone did get around to writing her well, but there's not much sign of it in the two Showcase volumes so far available. 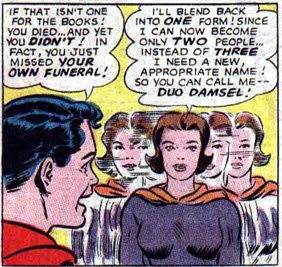 And it gets worse. In volume two, one of her selves is killed! One third of her being is destroyed! And so we get a touching little scene in which she says "Oh, guess I'll need a new name, then." You can almost feel the entire lack of emotion. By complete coincidence, the day I read the story, I also saw the episode of the Legion cartoon where T-Girl #3 gets offed, and they at least gave her a couple of minutes to be upset about it before changing her name to Duo Damsel.

And then to cap it all, in a recent storyline (mostly Countdown) she loses her second self, and renames herself Una. She now has the super power of being able to be one girl. I'm not sure if this technically counts as a super power anymore.
Posted by Marionette at 12:47 am

And then mutant rats eat her.

Luornu does precisely the covert thing you suggest in a Shooter story in Adventure, and she's described as a member of the "Legion Espionage Squad" led by Chameleon Boy.

Uh, there can be only one?

When Computo returned in the story that introduced Invisible Kid II (art was by Keith Giffen, not sure if he or Levitz wrote it), emotional trauma was "retconned" in for Luornu. She remembers years of nightmares etc and almost loses it when she hears that the murderer of her 3rd self has returned. Good story that was.

But yeah, Countdown sucked horribly. Not sure if it was clearly stated that Una was the only surviving one, though, or if the other half of the duo had remained in the 31st century.

They did come up with one use for Triplicate Girl (or maybe it was Duo Damsel). She went into a museum where they carefully monitored the people entering and exiting so that all visitors were accounted for before museum closed. By entering as one girl, then splitting into three, then having one leave, the museum security had no idea that the duplicates were still behind.

But aside from that, yeah, she didn't have much of a power. Kind of like Matter-Eater Lad, who pointed out that his power meant he could munch his way out of any prison.

In a setting where realistic psychology and physics are, let us say, phenomena non grata, Lu's abilities are yawn-inducing. But if anyone ever does a Legion involving science, she would be by far the most fascinating Legionnaire. What would happen if she decided, for instance, to absorb Superboy into herself instead of the third twin? Or she split off a teensy version of herself ala Shrinking Violet? Can she manifest a version of herself behind a locked door? Does her weight triple every time she melds, or does she have an innate ability to shift mass the way Star Boy does? And why wouldn't she be able to create new "thirds" every time one got "killed"? She is, in theory, a one-woman Legion, and ought to be used that way.

Or, hey, I've got an idea...we could have her eaten by rats! Yeah, that would be ALMOST AS GOOD.