While I was waiting for the Sony Reader to arrive on my doorstep I've been preparing a bunch of books to load onto it using Calibre on my PC, which is a great little program that appears to be able to convert almost anything into a format my Reader can understand.

I therefore picked samples from many different sources and formats to test how the Reader handled them. The one thing I'd been a bit concerned about was the page refresh speed, particularly with graphics, after seeing this little video.

The reader duly arrived. Instructions are minimal. One page of the small leaflet shows you where all the buttons are, and the other page basically just tells you to plug it into your computer and follow the prompts. To be fair, it's a fairly simple device. It only does the one thing, so the instructions don't need to be lengthy. But it would have been nice if it had informed me about basic functions like automatic bookmarking of everything you read, rather than leaving you to find this out by trial and error.

The unit itself is the size of a Tokyopop manga, but a lot thinner. Also noticeably heavier. I did set up the official software, but soon found it limited and annoying. I think I'll probably just stick to Calibre.

I loaded it up with my test selection of books, and started reading. 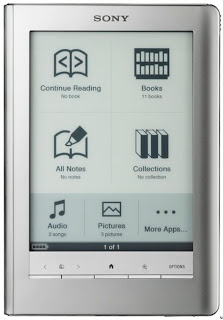 First impression is how dark the screen is. I'm just not used to a screen that isn't backlit. It's fine in normal daylight, but I can see why they sell little light attachments for them. Next thing I noticed was that I had a little trouble focussing on the lettering. I think that's maybe because I was trying to read it at the distance I would for a normal book, and it's not quite the same. We shall see.

Then I got on to testing how comics looked on it. Manga looks surprisingly good, although text readability drops off fast as it gets smaller. Some fan translations use an unnecessarily small font that leaves lots of empty space in the text boxes and balloons, and is difficult to make out even on a full size monitor. After a little trial and error I found that changing the orientation does wonders for readability. It leaves something to be desired aesthetically to only be able to see half a page at a time, but I'm prepared to sacrifice that much if it means I don't have to squint with my nose pressed against the screen. It still doesn't save the tiny-text fan scans, but I'm not sure what would.

The major relief is that page-loading times are fine. I noticed it was a little slower for a 200 page file, but I'd expected that, and had intended to split up anything over 100 pages anyway. As far as manga is concerned, it ticks all the boxes.

Ordinary book files read pretty much like reading a regular book. Variation in quality seems more down to the original file coding than anything else. Hard to say without an extended test. I need to actually read a whole book on it to judge.

The touch screen works so well I almost forgot to mention it. After a couple of minutes it felt so natural to turn pages by a little flick of the finger that I stopped noticing I was doing it.

Clever stuff you can do with the Reader includes highlighting passages or even scribbling on pages, but I can't work out how to do the dictionary look up, though. You'd think a machine that is perfect for reading PDF manuals would come loaded with one of its own, but no. I think I saw a review on Youtube that went through all the features. I'll have to see if that explains it.

To conclude first impressions, it seems to do pretty much what I expected of it, which is a good thing, since that, after all, was why I bought it. Biggest drawback at this point is the annoying lack of documentation. But, to be honest, if the worst you can say about a new device is that the manual is a bit lacking, then I think it's a good result.
Posted by Marionette at 3:26 pm