It's about time! (and space)

Valerian and Laureline vol 1. The City of Shifting Waters 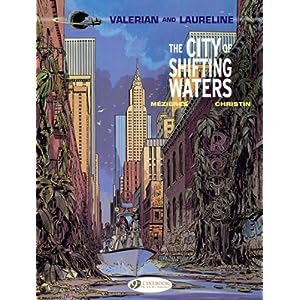 ng time readers may recall that I was so appalled at the quality of the translation of the most recent English language edition of Valerian that I started working on my own translation of one of the earlier volumes. The good news is that Cinebook have now started translating the whole series from the beginning.

I had high hopes for this translation as I've read several other European books that they have published in English editions, and I wasn't disappointed. Unlike the terrible ibooks translation the new one is clear and entertaining. In fact the plot isn't hugely interesting or original, involving Valerian and Laureline tracking down a mad scientist who has escaped back in time to 1986.

Not that this is a 1986 you'd recognise. The polar ice caps have melted and New York is underwater. And this is where the story really stands out. The art depicting flooded New York is fantastic. It's interesting to see this alternate 1986, though when it was first published in 1976 this was a possible scary future instead of a warped past.

Although I'm happy to see it, and I love the art, this is clearly an early work and neither the writing nor the art have really hit their stride yet. I found it odd that there are no women in the story other than Laureline, and even odder that nobody in the story appears to notice. Even in this early adventure Laureline is clearly more competent than the titular hero, and in fact is held back for the first part of the story for no very good reason other than to enable Valerian to get into trouble for her to rescue him from when she does turn up. And then later in the story she is again put out of action so that Valerian can bumble about ineffectually.

The writer, Mezieres seems to have some issues with women, though he seems to have got over it by Ambassador of the Shadows (vol 6) where Valerian is kidnapped and Laureline is allowed to take centre stage to rescue him.

One thing I like about this new edition is that the series is not called Valerian Spaciotemporal Agent as it was known when this was first published, but the current (and more accurate) Valerian and Laureline.
Posted by Marionette at 1:47 am

Email ThisBlogThis!Share to TwitterShare to FacebookShare to Pinterest
Labels: Valerian

It's good they've changed the series name to Valerian and Laureline, but it would have been even more accurate to name it "Laureline & Valerian" as it is she who really is the leader of the team. In the Nordic translations Sweden, Denmark and Norway, I think the series always (since the early 70s) has been called "Linda & Valentin" putting the Nordificated name of Laureline first. I sincerely hope cinebook leeps up releasing these, because I want the entire series in English. I would Love for them to also translate the two books on "Inhabitants of Space" which are encyclopedias of the Valerian Universe.