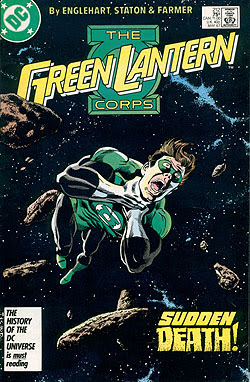 Okay, so I should probably be doing something more retrospective to mark not only the first post of my second year at this, but also my 200th post, but I couldn't work up the enthusiasm, so you are getting a review of an old comic (okay, two old comics. It's only the one story) instead.

In this story Star Sapphire and Hector Hammond team up to make slaves of Hal Jordon and Arisa. Well, they initially try to kill Hal, but then when that doesn't work they mind control him.

It's a mixture of stuff I liked a lot and stuff I disliked a lot. Steve Englehart clearly had some issues he needed to work through, but I don't see this as the place to do it. The whole male vs female/mind vs body debate that he has going between the villains is not entirely out of place, but it sits heavily in the comic, repeatedly bringing the action grinding to a halt while the two vie for superiority. 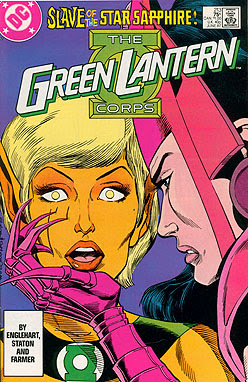 The scene where Star Sapphire strips naked to prove she can even make the immobile intellectual Hammond sweat is particularly tangental, and I'm not convinced that she even scores a point there unless you take it as read that any woman can control any man simply by taking her clothes off. Affect them, sure. But control? I don't think so.

And where did all that hair come from? Star Sapphire's hair varies from waist length to below her knees, and in this scene there's so much of it that she can wrap herself in it like a beach towel.

The whole slave segment where Arisa and later Hal (at least it's equal opportunity) are degraded by their captors under mind control kind of fits the story, and it pretty mild compared with what I'd expect in a similar scene today, but there's some unpleasant subtext going on that I can't quite put my finger on.

This debate/contest is never really resolved. Ultimately they are stalemated until Star Sapphire gets Arisa to help her. Perhaps this is a comment on the duplicity of women, but it could also be read as their being more resourceful.

Anyhow, aside from Englehart's issues this is a well written story with clever twists and turns, and a great cliffhanger at the end of the first part where we see Hal Jordon burst. The first part revolves around Arisa being mind controlled to lure Hal into a trap, and it is explained that she is vulnerable because of her recent transformation, so there's no suggestion that it was because she was the girl. I particularly liked that at the end of the story she gets a good solid cathartic resolution. It is Arisa who rescues Hal, Arisa who beats the trap that caught her companion, and Arisa who punches Star Sapphire's lights out.

Those who ignore history are doomed to rewrite it in a 7 issue mini-series.

Nice review, this is the one that convinced me Arisia was a cool character. :)

Arisia's odd backstory was intriguing back in the day. Englehart literalized a common comic book event that no one in the stories ever "sees" happen, the teenaged child character suddenly advancing in years to sex-bomb status (See also Donna Troy, Cassie Sandsmark, Namorita, et al), and allowed the audience to be vaguely creeped out by it. Conversely, he also allowed for Hal and Arisia, the people in the relationship, to maybe know a little bit more about it than their critics and be comfortable with it and each other... Quite the read at the time. Englehart also expounded greatly upon the Scarlet Witch and Vision marraige as I recall, with a great deal of sensitivity, humor,imagination, and an open mind. All undone later by far more conservative thinkers and feelers, of course, including the fellow who claims that sad fanboys think too much about the characters' sex lives and yet also established that Lex has a film of teenaged Lois being strip-searched, Barda has done non-consensual porn, Simon has been sexually assaulted by Wanda, Namor is sterile, and the Vision is an eunuch. I wonder if Hal's history as a "statutory rapist" is going to play a part in Arisia's possible return.