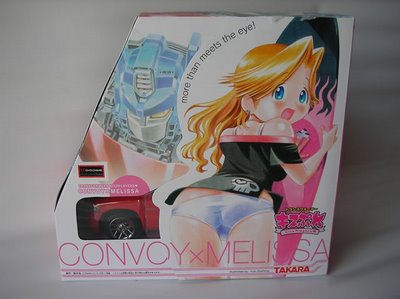 I've never really "got" the whole Transformers thing. When I first encountered them I was already watching anime and they just seemed like an american take on Mecha, only where instead of being machines for Our Heroes to pilot, the machines themselves were anthromorphised into having personalities like Thomas the Tank Engine. That was strike one.

Strike two was the whole rationale of having a whole bunch of robots living on a robot planet who all turned into like cars and planes and VCRs and shit. I could never understand why they should be designed to do this, since the robot planet didn't seem to have any people in it anyway. Or why they should pretend to be consumer products from Our Planet anyway. I'm sure it's all rationalised somewhere in Transformers lore, but I was never that interested to find out. And how is it that untransformed they are all pretty much the same size, but transformed, one can be a fighter plane or a truck while another will turn into a CD player or a gun? How does that work?

So the appeal of Transformers passed me by and the only one I ever owned was the one that's basically a Macross Valkyrie, because some guys I used to hang with didn't believe it really existed, so when I saw it in a thrift store I bought it.

And now I just heard about Transformers Kiss. It's so utterly bizarre and fucked up I almost like Transformers now.
Posted by Marionette at 9:38 pm

As an American male that came of age watching Transformers I do get it, and comparing them to 'Thomas the Tank Engine' makes my soul want to shrivel up and die! ;)

Here's all you need to know: it was a robot, it was a vehicle, it came with teeny little weapons. It was the perfect toy, nothing else mattered.

And while they did explain why they transformed into Earthly forms, they never did explain how 30ft tall robots changed into guns, microscopes and boomboxes.

Transformers kiss? What the hell is wrong with people. I used to love that show, and now I'm not sure If I could deal with the possiblity of an alien robot being a pedo.

Lately, though, I've been seeing more of the actual details of the series, and seeing this box art with the girl in a compromised position and her *panties* showing seals it: It really is that fucked up.

We are all fucked up, in Japan and America, but in different ways, I guess.

Anime. The bane of us all.

If this stuff could be sent back to 15th century Japan, I bet the entire Samurai culture would commit ritual suicide en masse.

I just saw this toy at my LCS this week. :-p