Back in the land of long ago I once saw a neat science lecture that was full of cool stuff about perception. One thing that particularly stayed with me was an experiment that was done live, where a member of the audience was hooked up to a headset and fed a speech through the earphones. They had to repeat what they were hearing into the microphone without pause as it progressed.

Now you'd imagine that repeating at that speed would not give you time to process the information, but when the original speech and the repeated version were played back it got very interesting. Because the original speech was full of slight mistakes, and the repeated version had corrected them. Clearly the mind is a clever and wonderful machine. Clearly also, people don't listen very hard to what they are hearing, and fill in any gaps with what they think fits the context best.

But what's this got to do with Disney cartoons? 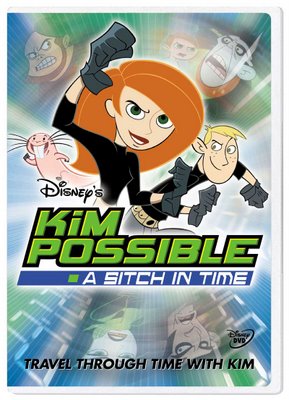 Kim Possible is my favourite Disney TV cartoon, second only to Darkwing Duck (1). If you've ever seen Kim Possible you will know that her catchphrase is "What's the sitch?"(2). This may not be a patch on "Let's get dangerous!"(3) but it does allow for a time travel movie (4) of the series to be called A Sitch in Time. Which would be neat and clever if anywhere that carried the DVD spelled it right (5).

Notes
1. She's got this weird thing going with her upper lip that makes it look like she's got a chocolate milk moustache the whole time.
2.Sitch - short for "situation" in fashionable young persons' talk.
3. Catchphrase of Darkwing Duck.
4. If you can really call something 66 minutes long a movie.
5. A brief random sampling of internet sites found roughly half the people selling or commenting on the DVD had failed to successfully copy the title of the box in front of them and "corrected" Sitch to Stitch. How dumb does it look to repeatedly quote the title incorrectly in an article when you have the cover art prominently displayed next to it with the correct spelling?

Posted by Marionette at 4:53 am

I wonder if she'll meet Good SheGo when she goes back in time.

Nope, it this is the one I have seen she runs into really, really evil SheGo in the future.

That is totally moopy. But you know what? No big. So not the drama. The tweebs who write those articles think they're all that, but they're not. Hikka-bikka-boo? Too-shaa! And may I close by adding, boo-yah!

...didn't I just see a Darkwing Duck Season One set in the store?\