The announcement that tells us of the Batgirl Showcase collection also lists, a month later, the following: 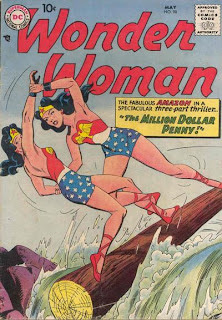 Having said that, this collection is exactly what I wanted in a WW Showcase and I am hugely excited about it. It collects the never in 40 years reprinted before in any form first silver age issues of Wonder Woman starting from #98, where Ross Andru and Mike Esposito took over the art, and opens with the wonderfully deranged origin retelling that contains elements which no later origin story ever dared acknowledge. This volume also introduces Wonder Girl and (I think) Wonder Tot, but they don't get to team up with Wonder Woman until a while later. This is Robert Kanigher at his loopiest, so check your brain at the door and sit back and enjoy the pretty colours.

Yes, I know it's a black and white collection. Trust me.

Posted by Marionette at 7:27 pm