(I hadn't been planning to write much more about the early Legion adventures, but these Showcase volumes are so full of daft ideas that I can't help wanting to share the fun.

But first, a correction. In my previous article I said Shrinking Violet and Triplicate Girl weren't introduced until Adventure #300. In fact they, and Bouncing Boy first appear in a Supergirl story in Action #276 that, more than any other appearance, has all the hallmarks of a stealth pilot, as it features the most complete version of the Legion prior to their own series.

In this story we are told that the Legion has revised its policy of only allowing one new member per year to allowing one boy and one girl per year (1). Applicants shown include Brainiac 5, Sun Boy, Bouncing Boy, and Shrinking Violet. Since all of them are members by Adventure #300, the Legion series must take place at least two years later, assuming that these guys were taken on their second or third attempts, over other applicants that hadn't already been rejected (2)(3). 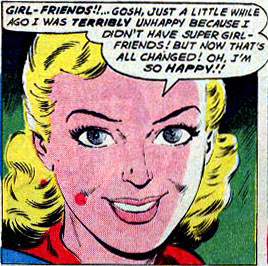 her by wearing a mask, even though she is in full costume and has demonstrated her powers; the whole "super-girlfriends" routine which is ripe for innuendo by someone with a smuttier mind than I, and Supergirl's demonstration of power for her membership application, which involves destroying hugely important archeological sites by burrowing down to cherrypick a couple of choice items that made the archeoligist in me wince, and my experience is limited to watching the odd episode of Time Team; and ho 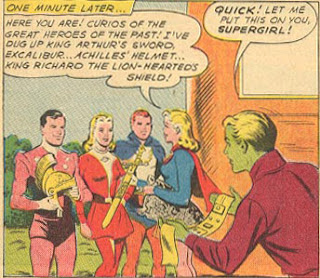 w convenient is it that a kryptonite meteor just happens to fall out of the sky right on top of Supergirl just in time for Brainiac 5 to demonstrate his cleverness and self-sacrifice by slapping his force field belt on her and tuning it to fit her personally in less time than it takes for her to get out of the way of it. Anyone would think he had arranged it on purpose...

I feel a bit sad for poor Shrinking Violet here. I mean here she is, she's got as far through the Legion application process as having a placard with her own name on it, and then at the last minute she has to go up against someone who is related to the most famous hero in history that inspired the Legion in the first place, and who they have traveled back in time to personally invite. It must be particularly galling when Supergirl bogs off as soon as she's inducted and hardly ever turns up for meetings(4). She doesn't even get to be one of Supergirl's super-girlfriends. 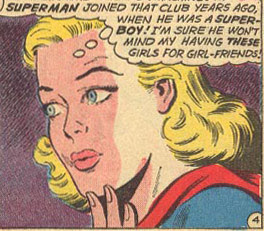 1) which makes you wonder how they end up with a 3:1 male/female ratio.
2) In Adventure #301 we find that Bouncing Boy was rejected once.
3) However, since there are no new female legionnaires between this and Adventure #300 I can only guess that Sun Boy reapplied in drag.
4) Talk about nepotism...
Posted by Marionette at 9:41 am