The Paris Hilton of the superhero set

No, not Supergirl. The other one; Stormy Knight AKA Phantom Lady. When I was first introduced to the current Phantom Lady I was intrigued to find that beyond the cliché hot bod, at age 22 she also had a degree in quantum physics. I've been waiting for the last year for Jimmy Palmiotti and Justin Grey to develop the physics nerd side of her, but they seem to have forgotten that whole aspect in favour of making her a drunk, embarrassing, airheaded party girl, drowning in cliché.

Add to that Renato Arlem's lazy art, and I am fast losing all interest in Uncle Sam and the Freedom Fighters. It's bad enough when you see cut and paste in webcomics; to see it in a DC comic is simply wrong. I had been intending to do a quick count of how many panels in the latest issue reused elements from previous panels, but when it became apparent that there were several examples on almost every page, I gave up in disgust.

This comic has too many characters, which means you get very little depth to any of them, and the story is trying so hard to be "torn from the headlines" that it just comes across as tabloid cliché conspiracy theory with extra superheroes. It manages to be extremely wordy without saying much of interest, and the whole thing is a big disappointment.

Oh, and if you want to get an emotive image of someone slashing their wrists, you need to a) make them sympathetic beforehand, and b) use an artist who is not going to get it so totally wrong. Anyone care to guess what's wrong with this picture (other than the dodgy perspective)? 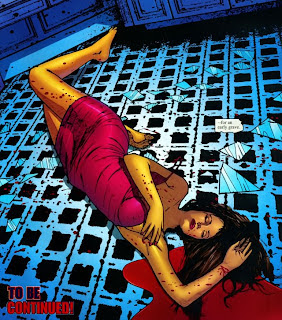 Posted by Marionette at 9:28 pm

1. Did she decide to POSE before dying?

If it means anything, it looks like Doll Man saves her next issue, so maybe after the rehab, etc. we'll see PL's scientist side.

I too thought of Rippy the Razor, but I've got to go with the fact that her right boob appears to be missing.

Hooboy, that is some dodgy artwork. Is it me, or does her right leg seem to be raised in the air? and her left leg is jammed up her butt apparently. And the perpective is off. And the blood under her hair, but her arm on top of her hair.

And about a million other things. But maybe I'm just being a nitpicker.

I think this artist works from photos a lot, but hasn't quite grasped how to slap the traces together to make images that work. Thus we have a body that looks about 8 foot tall, judging by the size of the head.

It's not that she is missing a boob. It's a result of her getting serious breast reduction surgery between mini-series. Or to put it another way, the women in the photos Arlem has been swiping from don't have the big chest balloons that were a feature of the character until he took over.

But as for the actual medical problems:

1) As everyone knows, if you're making a serious suicide attempt you don't cut across, you cut down. No way would those little nicks produce that much blood.

2) Despite little splatters of blood all over her arms and even her legs, there's very little around the cuts. We don't see whether she did her right wrist too, but there's no blood underneath it. If she'd actually bled as much as is indicated by the pool, her entire arm would be red.

Arlem doesn't just work from photos, he works from other artists: I've seen Buscema and Maleev swipes in his Marvel work.

That image is actually better than a lot of the other "art" in the book. His work is just a lot of photos for backgrounds, tracing & photoshop. This guy completely unprofessional.
I'd rather see a so-so artist, versus a faker like this guy!