I have no proof that what happened to Fantomah in Jungle Comics #27 was the first retcon, but it has to be one of the earliest in the history of comics.

It's actually sort of Fantomah's second retcon. Her first was in Jungle
Comics #16, but that was a much softer change; a result of the strip losing its original creator Fletcher Hanks. I don't know who the subsequent writers or artists were, but although Fantomah is doing her "spirit of vengeance" gig, she no longer has her characteristic skull-face and she's traded in her little black dress for a blue swimsuit. She later picks up a pet panther in #19, and even a boy sidekick in #23.

No explanation is given, and it's really more a change of style than an actual retcon. It might even be considered simple progression if it wasn't quite so abrupt. The changes that occur in #27 are in a different league. 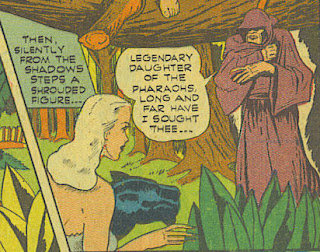 As the story opens, Fantomah is accosted by an cloaked figure who has been searching for her. He calls her "daughter of the Pharaohs", tells her that her city needs her, and gives her a whole new outfit to wear. Fantomah initially claims no knowledge of what he's on about, but goes along with it. Once she is in the new outfit, her hair magically changes colour. 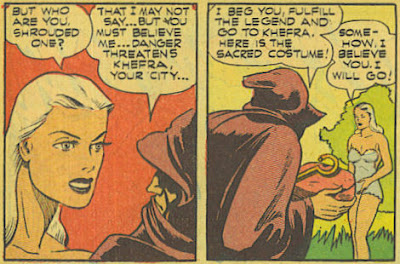 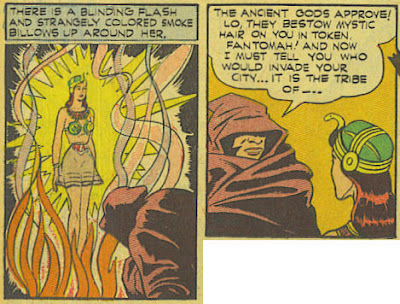 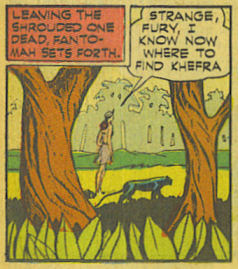 The old guy is almost immediately killed, but Fantomah mysteriously knows the way to the hidden city she's never heard of. When she arrives, she is immediately hailed as it's queen, and takes charge. By the end of the six page story she has forgotten about her boy sidekick (who never even appeared in the story), and now appears to be a normal woman with some Egyptian-themed magic. She has also acquired an arch-enemy. 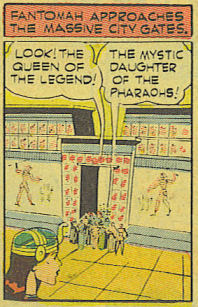 So to recap: They've changed her entire appearance, location, powers, and supporting cast. When the only thing left from the previous series is the name, you have to wonder why they didn't just start a new strip.
Posted by Marionette at 2:00 pm

Email ThisBlogThis!Share to TwitterShare to FacebookShare to Pinterest
Labels: fantomah

It's the approval of ancient gods that's given me mystic hair, too. Once your follicles are divinely blessed the mystery will be resolved...