This week's Marvel comics (well the one I read, anyway) contain an editorial from someone called Molly. I have no idea of who Molly is or what position she holds at Marvel, but I was so gobsmacked by her words that I'd like to reproduce them here in full. Responses mine.

My roommate, who is a teacher, told me that one of her students had asked her if Captain America was real. The girl’s brother had told her that he was pretend, but she badly wanted him to exist When I heard this story, the thing I was most surprised about was that a ten year old girl knew about a comic book character who hasn’t appeared on the big screen. But the times, they are a’ changing.

At Wizard World Philadelphia this past weekend, another friend of mine remarked that she’s been seeing more women at the convention each year. It’s no longer a surprising thing to see fangirls pawing through the stacks of half-priced trade paperbacks with the fanboys. I’ve been a comics fan since I was five years old. Growing up, I didn’t meet any girls who shared my interest. But now the female comics fans seem to be coming out of the woodwork. Groups like Friends of Lulu have formed to unite women who read and work In comics. Many stores have ‘girl friendly” titles on display,

but the employees are just as willing to show female customers traditional super hero books if that’s what they’re looking for. And it’s not just the number of female fans that is growing. The women inside the pages are getting a better rap as well.

Are you sure you didn't miss an "e" there? (okay, that was a cheap shot, but I just saw the latest issue of Walking Dead.)

Because at least one of those listed hasn't been sexually assaulted.

Yes, many of these characters still have gravity-defying proportions that would cause them serious back problems in real life. But we’re taking steps towards getting to a point where female super heroes get as much respect as their male counterparts.

what steps would those be, then? Your boss certainly doesn't seem to consider having any female creators to be one.

We’ve still got a ways to go before the general public sees comics as a medium designed for everyone—men and women, adults and children alike.

Kind of like how it was before the industry totally focused on superhero comics, you mean?

But with every new reader who picks up a comic book and likes what they see Inside, we’re getting closer.

You are? In what way?

So, yes, little girl, Cap can be real, If you want him to be.

But finding a female superhero role model might be a little trickier. 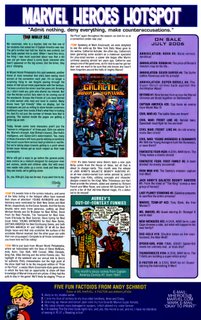 Posted by Marionette at 9:59 pm

Why do I suddenly have the song "Pure Imagination" stuck in my head? :P

Molly is Molly Lazer, an editor.

I saw this on Wednesday. It was in my Thunderbolts comic. I was irked as well.

Well, given that the general message is "quit your bitching - don't you see how well we're treating you?", I can see there being SOME problems with what "Molly" is saying.

I don't get that message from that at all, though. I just saw it as the obvious - a celebration of where we're going in comics.

In related news, women are becoming more equal every day! Why, misogyny hardly even exists anymore.

The exact same column could have been printed 10 or 20 years ago and would have been just as (in)valid. There's no measurable for "better" or actual visible proof required. Things are always "getting better" because progress is just inevitable, you know.

Apropo of nothing, Lazer does edit Thunderbolts, one of the few Marvel books with a strong female lead whom the writer doesn't seem to have a seething contempt for (ie, Whedon/X-Men), or enjoys making suffer (Bendis/New Avengers).