I haven't commented on the recent ups and downs in the life of Cassandra Cain. I hadn't been reading her own title for a while before it ended, although I did take a look at the last couple of issues when I heard about the fuss. I also read the issues of Robin where she is transformed into a villain.

My own theory was that the talk of David Cain training other girls was a clue, and that this chatty villain was going to turn out to be Cassie's evil twin. I mean it obviously wasn't Cass.

Sadly, I find that my guess was wrong and that it was Cass; just a very badly written Cass, who behaved and talked nothing like the character I knew.

But somewhere up at DC, whoever was responsible for this villainisation got overruled and Teen Titans #43 gives us an explanation that allows Cass to return to the good guys' team. It's a bad explanation, which doesn't begin to cover the changes that were made to her in Robin, and it's all about abuse and mind control, but I see a lot of fans happy to accept it because it gives them Cass back.

This in turn has prompted a reaction to happy feminist fans of Batgirl that can be summed up as "Oh, so it's okay to have a story of abuse towards women when it suits you, is it?" To which the answer is "No, but this bad thing fixed something that was worse. We do not cheer the bad fix, we cheer that the worse thing is gone." 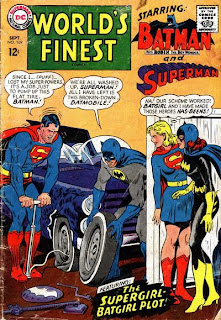 In other Batgirl news, I'm intrigued to find announcement of a Showcase Presents Batgirl collection. This is an innovative move on the part of DC collecting the adventures of a character who never had their own strip*. So Yay! to DC for thinking outside the box, but a Wha? for picking this as their first collection starring a female character, and when there are so many great silver age comics waiting on dusty shelves that are being passed over in favour of obscure war comics and this collection of guest appearances.

Which is not to say that I won't be first in the queue for this book. It's a great collection and contains one of my favourite silver age comics ever.

*Okay, she did have a brief solo strip in the anthology Batman Family title, but it's not included in this collection.
Posted by Marionette at 7:05 pm

She had a solo strip at times in the 80's in Detective. Was she only in teamups before then?

As to the order, DC seems to be deliberately spreading it out. The first Batman took awhile to come out, and Green Lantern has his 2nd volume come out before Flash or WW get their first volumes out.

What other female characters can get their own Showcase? Supergirl will certainly get some. Lois Lane will share Superman Family with Jimmy. I don't think Black Canary had many silver age appearances on her own. Any other canidates?

Given the way they are including even the appropriately titled "War that Time Forgot" (I'd never heard of it), the only qualification would be pulling together enough pages including guest appearances, but I can't think of any other female characters that appeared solo in the silver age, apart from Supergirl.

Batgirl did have solo appearances. She starred in a series of two part 8 page back up stories in Detective Comics, starting with number 384 and running up though around 424. It wasn't a full time slot: they alternated between Batgirl backup stories and (I think) Robin backup stories, but over time she started appearing every issue, until she hung up her cape to become a member of Congress.