I wanted to compare the treatment of Aqualad and Wonder Girl in Teen Titans with their adult counterparts in early Justice League, but it took me a while to work up the energy to read the Justice League Showcase collection. Gardner Fox is not my favourite silver age writer, and if there was ever a poll of DC's all time most annoying character, you can bet that Snapper Carr would be a contender.

On the other hand I am surprised how much I warmed up to Bob Haney after a few issues of Teen Titans, and I can hardly believe I didn't like Robert Kanigher when I first encountered his work, so maybe some intense study of early JLA would help me find the fun a third time.

500 pages later I am still not much of a fan of Gardner Fox, but the volume wasn't quite the chore I had expected, and Snapper Carr doesn't appear enough to be more than an irritant. The plots are formulaic and dumb, but provide enough entertainment, often for the wrong reasons, that you don't completely glaze over.

As with the Batman volume, the stories often suffer from the "Schwartz cover" effect. That is, editor Julius Schwartz commissions an exciting cover and then hands it to the writer to tell a story around, but then doesn't seem to care how the cover image is shoehorned in. The result often being that the cover scene is a ludicrously contrived moment in an otherwise unrelated plot. Which is disappointing, as the covers, often very intruiging or exciting, promise so much, but deliver so little.

The cover to JLA #1, for example: an alien plays a strange boardgame against the Flash, with the rest of the team at stake. Except that in the story the entire thing is fixed and it's just an excuse for the alien to transport them all away which he could have done anyway as they were already within his power.

But back to my original motivation for reading the book. How does Gardner Fox's treatment of Wonder Woman and Aquaman compare to Bob Haney's use of their counterparts in Teen Titans?

Aquaman is less obviously useless because of the nature of the stories. Where Teen Titans is given a realistic setting, the JLA are usually thrown into a fantasy landscape, so tailoring part of it to suit Fishguy is less blatant. Plus the formula plot usually involves each member of the team being transported to an environment designed specifically for them, either on another planet or an alternate dimension.

Wonder Woman is not singled out in any way. There is even less characterisation in JLA than there is in Teen Titans, which hardly seems possible, but it's true. There are no distinguishing voices, and many of the team are differentiated by a single ability: Aquaman talks to fish, Wonder Woman has a rope, Flash runs fast, Green Arrow shoots stuff. These characteristics are applied to every possible situation. Green Arrow can't put handcuffs on a subdued villain without using a handcuff arrow, Aquaman can't make a cup of tea without the assistance of his fishy friends. Beyond that their abilities are a bit vague. 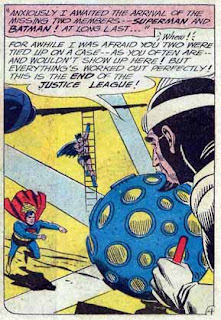 In Post-Crisis/Pre-Infinite Crisis Wonder Woman was retconned out of being a founder member of the JLA, which is little ironic when you read the original comics, where you find that she was the only one of the big three who put in serious time on the team. On the occasions when Superman and Batman actually do show up, they often find excuses to disappear for the bulk of the story.

It gets so bad that even the villains start to notice.
Posted by Marionette at 4:17 pm

I haven't read a whole lot of early JLA, but I do agree with you that Snapper Carr drives me to the point of insanity. I just want one of them to reach over the next time he starts snapping his fingers...and break his thumbs.

I think Snapper was redeemed as a character in in the classic JLA #200, but then I never felt he was any more annoying than a lot of other sidekicks. I do wonder what his girlfriend Midge is doing these days...

Check out "Journey into the Micro-World," the Starzl story, from #18 (reprinted in #93). It actually has some characterization, all the more precious for its rarity.

What surprised me was how much easier Snapper is to take in context. Maybe it's because everyone else is so dumb so much of the time that he doesn't stand out.

I particularly like the scene where various characters have been distorted to look like funhouse mirror versions of themselves and they so totally fail to notice that they are looking in a mirror and saying "wouldn't it be weird if we really looked like this".

For Kanigher's best you need to go to the war comics.