It's in the name

The Legion of Superheroes has always had something of a reputation for sexual equality, and now with the publication of the Legion Showcase collection we get the opportunity to see their earliest appearances, and a somewhat different picture emerges. Basically, unless you were Saturn Girl, the preferred trait for a female legionnaire seems to be the ability to fade into the background and keep quiet.

When the Legion first appeared, the name was really a bit of a stretch. Only Cosmic Boy, Saturn Girl and Lightning Lad were in any way identified or got speaking parts, with a few backs of heads to suggest the Legion had more than three members. In most subsequent appearances a couple of new members would be introduced, although they never got to do much, until the Legion finally got their own series in Adventure #300.

This comic introduces two new female members, even if they don't appear in the story: Triplicate Girl is on the cover and a statue of Shrinking Violet is shown among other Legionnaire statues on the first page(1).

Shrinking Violet's first actual appearance is Adventure #301 where she appears in two panels, filling out group shots. She continues to stand at the back and say nothing for some time, except #305, where she gets to speak briefly. I can only guess this was because Star Boy was out sick and Lightning Lad was dead that day so she had to fill in, as she doesn't get to speak again until 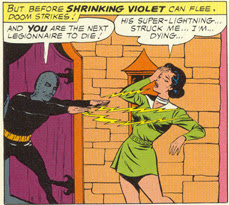 #310, where, for the first time in ten issues, she gets to use her powers. And then dies.

This being the Silver Age, she, and everyone else who dies is fit and healthy again by the end of the story. Over the next 20 issues Violet gets to use her powers twice more, to little effect, and it's not until #324 that she gets any individual attention, falling for Duplicate Boy, who conveniently leaves at the end of the story. 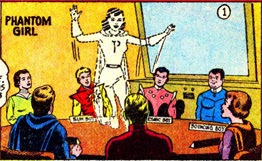 Phantom Girl gets it even worse. She is the first female legionaire introduced (2), appearing briefly in #290 for one panel (3). In #301 we find she is off on a distant planet on a vital door opening mission, which keeps her absent until #313. In fact she's not even listed as a legionaire, absent or otherwise, for twelve issues. She then vanishes again until #316, where she finally gets to speak, and even takes an active role in the story. She's next seen in #319 filling out the crowd scenes, and succumbs to a weapon that only affects her because she's not the star of the story.

Thereafter she appears semi-regularly, filling out the cast and occasionally getting to participate in the plot, but a lot of the time the writer hardly seems to notice she's there, which means that the contrived ending to Adventure #325 could have been avoided if he'd only remembered the power she'd demonstrated two issues earlier.

And then there's the names: Phantom Girl - A girl with a power to make herself so inconsequential that she's entirely forgotten for years at a time, and Shrinking Violet - the shy one with the power to make herself so small that nobody even notices she's present. I bet if Camouflage Girl (the girl with the ability to blend entirely into the background) had applied for membership they would have snapped her up because she would have fitted right in.

1) Why the team have statues of themselves is not explained.
2) other than Saturn Girl.
3) two if you count the splash page, which is the same image

Posted by Marionette at 8:22 pm

Hi! Glad you're back blogging now and then. I, um, sort of tagged you in a meme. It’s at the end of the post.

Fun facts! Do you, or anyone know if Interlac uses a different base than base 10? I'm trying to puzzle out how only one person can join the Legion per year and it's in the constitution you have to be a teenager...doesn't add up unless you count different in Interlac.