Kids of Tomorrow got No Respect!

I think one of the things I like most about the early Legion is their total lack of respect for anyone. They'll travel back in time ten thousand years in order to invite their greatest hero to join their club, and then play a practical joke on him and make him cry. 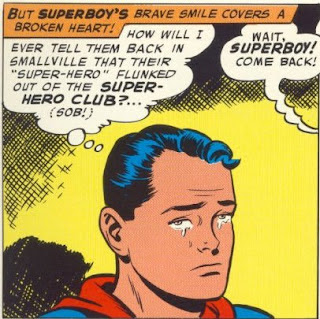 They cross centuries again to invite Supergirl and then refuse to take her because while following their directions she accidentally gets a dose of red kryptonite that makes her look too old, even though A) she hasn't actually aged, she just looks slightly different (visually she just appears slightly taller and to be wearing lipstick), and b) it's a temporary effect that will wear off in a couple of hours. 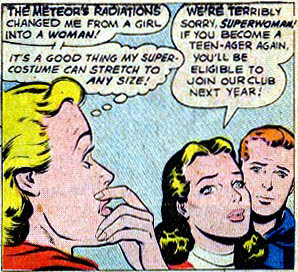 So it's hardly surprising that when you see what appears to be a continuity error, such as them telling Supergirl that they are the children of the legionnaires that met Superboy, it's easy to read it as them just having a laugh at Supergirl's expense.

The bastards.
Posted by Marionette at 2:35 pm

To be fair, how hard is it to make Superman cry?