I'm interested in folk tales, or fairy tales, if you prefer. These days they are generally considered only to be the province of children, but go back a couple of hundred years and they are decidedly not purely kiddie fare.

I'd blame Disney, but to be honest, the rot set in decades before the Evil Empire of The Mouse first started putting their stamp all over them. Thomas Bowdler got the whole thing started in 1807 by rewriting Shakespeare with all the good bits cut out. He has justly been recognised with the introduction of the word 'bowdlerize' to the English language:

transitive verb
1: to expurgate (as a book) by omitting or modifying parts considered vulgar

2: to modify by abridging, simplifying, or distorting in style or content

With the success of the hacked up Shakespeare, other people without the talent to write anything original got on the bandwagon of desecrating important work by taking stories not specifically intended for children and making sure that even the most delicate five year old wouldn't find anything remotely challenging in them. Thus we have the Thousand and One Nights becoming The Arabian Nights (with all the sex cut out) and Andrew Lang's variously coloured Fairy Books.

Shakespeare survived the destruction, but many folk tales were not so lucky. You need to look very hard indeed to find unexpurgated editions of many stories, which is something I've been hunting for a while. I'm particularly interested in Grimm's Fairy Tales.

Originally Jacob and Wilhelm studied folklore, collecting tales and stories from oral tradition and recording them. Their book of Children's and Household Tales was a huge success, and they continually added to it over 17 editions. Unfortunately, they also got a bit overenthusiastic about copy editing the stories to make them stylistically similar, adding dialogue, removing pieces "that might detract from a rustic tone", altering the plots and incorporating "psychological motifs". Over the years, they expanded and added detail to the stories to the point that many grew to be twice the length as the original versions; in later editions eliminating sexual elements, and adding Christian elements. After 1819 they began writing specifically for children (children were not initially considered the primary audience), adding entirely new tales or adding new elements that were often strongly didactic to existing tales. 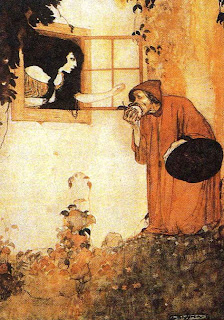 And that was before the book was even translated into English.  I thought I'd found an early English edition in Google Books.  It was called German Popular Stories and dates from 1823. But as the preface indicates, the English editors were already hacking out bits that the Grimm's hadn't got around to bowdlerising themselves, yet.

I started with Snow White as a point of comparison, to make a quick check of each edition I found. Earlier editions call her Snow-Drop, for one thing. And then there's this curious part where, after consulting her mirror,  the Wicked Queen sends the girl away. In this edition it goes:

When she heard this, she turned pale with rage and envy; and called to one of her servants and said, "Take Snow-drop away into the wide wood, that I may never see her more." Then the servant led her away; but his heart melted when she begged him to spare her life, and he said, "I will not hurt thee, thou pretty child." So he left her by herself; and though he thought it most likely that the wild beasts would tear her in pieces, he felt as if a great weight were taken off his heart when he had made up his mind not to kill her, but leave her to her fate.


Which is odd, because the Queen hasn't told the servant to kill her, just take her away. I spot a clumsy edit. Also, right at the end, the Queen is so annoyed that she falls ill and dies, which is kind of vague and convenient.

So then I hunted up all the other editions I could find of the Grimm's work, under various titles, and looked up Snow White/Snow-Drop in each one. All of them seemed to be derived from this same version except Household Stories by the Brothers Grimm which dates from 1886.


This gave the queen a great shock, and she became yellow and green with envy, and from that hour her heart turned against Snow-white, and she hated her. And envy and pride like ill weeds grew in her heart higher every day, until she had no peace day or night. At last she sent for a huntsman, and said,
"Take the child out into the woods, so that I may set eyes on her no more. You must put her to death, and bring me her heart for a token."
The huntsman consented, and led her away; but when he drew his cutlass to pierce Snow-white's innocent heart, she began to weep, and to say,
"Oh, dear huntsman, do not take my life; I will go away into the wild wood, and never come home again."
And as she was so lovely the huntsman had pity on her, and said,
"Away with you then, poor child;" for he thought the wild animals would be sure to devour her, and it was as if a stone had been rolled away from his heart when he spared to put her to death. Just at that moment a young wild boar came running by, so he caught and killed it, and taking out its heart, he brought it to the queen for a token. And it was salted and cooked, and the wicked woman ate it up, thinking that there was an end of Snow-white.

Which is much more fun, and makes the Queen much nastier. Of course she also gets a much more specific and unpleasant fate at the end:

First she thought she would not go to the wedding; but then she felt she should have no peace until she went and saw the bride. And when she saw her she knew her for Snow-white, and could not stir from the place for anger and terror. For they had ready red-hot iron shoes, in which she had to dance until she fell down dead.


Household Stories by the Brothers Grimm is available free at Project Gutenberg, along with several other, tamer versions of the Grimm's stories.