Action Comics #357 or Supergirl Showcase vol. 3 if it ever gets published.

Look, it was the Silver Age, and a Superman-related comic. Nobody could ever do anything straightforward, especially if it was anything to do with relationship stuff. If people went straight to the point, instead of concocting convoluted and unwieldy schemes, we'd lose about two thirds of Superman comics of the 1960's. 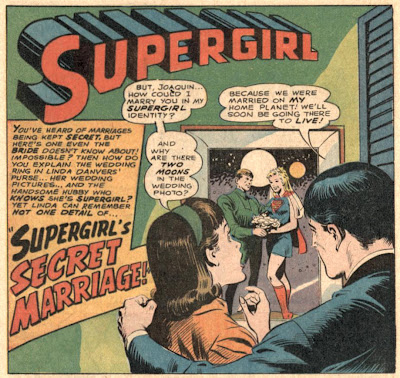 So here we have a typical example. Thal and Veena, who live on the planet Zhonnia, are engaged, but Thal becomes infatuated with Supergirl after she rescues the two of them from drowning in a burning sea of oil, and he breaks of his engagement to Veena.

So does Veena simply call Supergirl and have her tell Thal she isn't interested?

If you said yes, then you fail at Silver Age.

What Veena in fact does is disguise herself as a man and convince Supergirl that she (Supergirl) had married disguised-Veena-guy [1]and then a year later got amnesia and forgot about the whole thing.

This includes getting yet another girl to dress up as Supergirl to help her fake the wedding photos.

Then she invites some friends over from Zhonnia including Thal, so that he, seeing that Supergirl was married, would lose interest in her, and go back to Veena.

Of course Supergirl is not so easily fooled by a girl pretending to be a guy, and catches on while they are snogging, when she notices that Veena (in disguise) puts her (his) arms around her (Supergirl's) neck, like girls do, and not around her waist, like guys do. 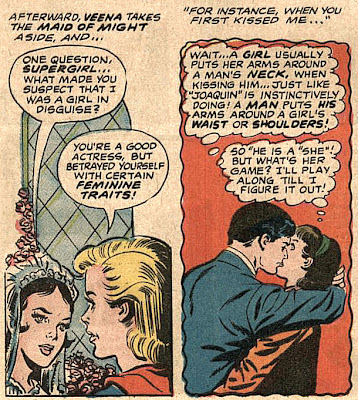 Honestly, Kara? That's what you're going with?  That's the only thing that gave it away?[2]

Despite this "proof", Supergirl is entirely comfortable continuing with the relationship until she works out what exactly is going on. and when she does put the pieces together she cheerfully helps Veena conclude her plan, and at no point says anything that resembles "What the HELL were you THINKING?"[3]

So no, Supergirl didn't actually marry another girl. But she did think she had. Possibly. Well, she definitely kissed another girl, anyway. At least once. 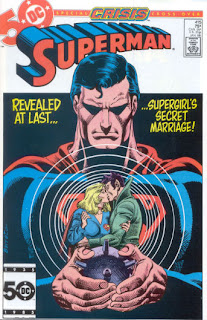 Interestingly, they would one day rerun this plot for realsies. The getting married and then forgetting it, not the complicated pretend part. I thought it was in particularly poor taste, myself. But in Superman #415, after Supergirl died in Crisis of Infinite Earths, a different alien guy pops up and spins the same yarn to Superman, about how he had married Supergirl but then she forgot, which is why she never mentioned to anyone that she was married and never invited anyone to the wedding or anything, and I'm going to just assume it was a con that time too, I think.


Notes
1. But didn't invite anyone to the wedding, even Superman.
2. At no point does she use her x-ray vision to gather further evidence. This is a family comic.
3. It was the Silver Age. This kind of thing happened so often it was hardly worth commenting on. Or maybe she was bi-curious and this was a good excuse to try out some girl on girl liplock. "But she told me she was a guy!"
Posted by Marionette at 1:14 pm