Who clothes the watchmen?

Or, where did you get that cute little outfit?

Where do superheroes get their costumes from? Okay, so some have outfits that come free with the magic thingy that gives them super powers like Green Lantern and Captain Marvel, and Batman probably has a sweatshop in Hong Kong working around the clock to keep him and his chums in cowls and utility belts, but what about your average everyday hero?

The Spider-Man movie is a good example. When Spidey first shows up in costume he’s wearing this horrible home-made number that any 12 year old would be proud of (except they’d probably include a cape made out of an old sheet). 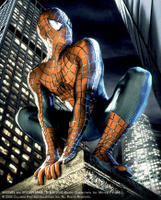 When he later reappears in the ribbed latex bodysuit we all know and love it is without any explanation of where it came from. Clearly he didn’t make it himself because we’ve seen what he is capable of. So where does he get it from?

In 1971 the answer for Supergirl, at least, was Diana Prince’s exclusive little boutique (this being the "unpowered" period of Wonder Woman where Diana ran a clothes shop).

Having ripped her costume in Adventure Comics #397 - and not in the modern boobwar level of costume shredding female characters go for these days but a few discrete tears in the sleeves and fraying at the hem - Kara uses this excuse to dump the frumpy eyesore Ma Kent ran up for her in 1957 and heads over to Diana’s place for a makeover.

Kara is in luck and has managed to catch the shop open as Diana is between jet-setting adventures in foreign parts with her ancient oriental transvestite mentor I-Ching, and Di runs her up a neat little number from what she has in stock.

And so before you can say “kinky boots” Kara is fashionably attired for crimefighting. Whether Diana is also responsible for Supergirl’s subsequent adventures in fashion is unclear, though it does seem that once Kara finally develops some interest in clothes, she runs wild with it, and subsequent issues of Adventure Comics show some highs and lows in superhero haute couture.

Ah, but if only this idea had been developed and extended to other titles. Diana Prince could have been the superhero costumier, like Edna Mode in The Incredibles, only taller. DC would at last have a simple explanation of where everyone gets their costumes. But it was not to be. And within a year Diana had shut up shop and was back in a costume of her own which showed very little influence from her experience in high fashion, due to an amnesia inducing bash on the head and subsequent memory tampering from her mother. It wasn’t until long after Crisis that she was again to show any hints of fashion sense.

But I can’t help wondering that even to this day in some long lost parallel universe there is an exclusive little boutique currently called “Capes and Belly Shirts” (it’s too fashionable to keep the same name for more than six months at a time, dahling) where (by appointment only, of course) an unpowered Diana Prince creates fashion fit for heroes.
Posted by Marionette at 4:43 pm

I'm a longtime admirer of Sekowsky's Supergirl and Wonder Woman...but I never realized the two had a crossover, even a brief one such as this. I really really really need to attend a convention sometime and stock up on the back issues of both series.

On the "costumier to the superpowered" question, wasn't Daredevil's former adversary the Gladiator briefly working in that capacity in the Marvel Universe? There's a scene during the Miller-Mazzuchelli issues where he receives an order for a counterfeit Daredevil costume and gets agitated over this, until an uncostumed Matt Murdoch (face hidden in shadows) reassures him no harm will come of it. Or have I got that wrong?

It always bothered me when Mary Jane had one of her fashioneer friendss design and make a Spider-Man costume for Peter. I kept waiting for the issue where the guy that sewed it up for her would see Spidey on the news and and realize it was his creation and figure that the guy MJ married is of the same build as Spider-Man.

Not that a secret identity means much anymore in Marvel. cough BENDIS cough.

Personally I like to think that there is somebody who fulfills the function of Edna Mole in the comic book universe. He/she would possibly take a neutral stance and work for both heroes and villains. At least, that's a character I'd create if I was a writer.

The villains have a costumer in Paul Gambi over in the Flash. I guess only Evil gets fashion help.

Wasn't there a tailor in a Straczynski issue of Amazing Spider-Man who patched villains' costumes?

And "Paul Gambi" was so named in honor of Paul Gambaccini, a BBC radio personality who's also a big name comics fan.

(In the mid-Eighties, I handed him his nametag at the UK Comic Art Convention...and didn't understand why all the Brits around me were saying things like "Is that really him? Did you talk to him? What's he like?")

And Paul Gambaccini did some noteworthy interviews with Kate Bush, including this one transcribed here:

Isn't it remarkable how everything ties together? I hope Marionette is suitably impressed.

At least according to the Silver Age, Kara's mother designed the suit while on Argo City to complement Superman. The first we see Supergirl in Action #252, she's wearing her costume.

I have to admit, the particular issue you highlight here was the beginning of the end for me and Supergirl. I'd always liked the Kara backups in Action, as they featured Jim Mooney and later Kurt Schaffenberger (who remained the artist on the first dozen or so Adventure issues).

This was an issue where the editors seemed to decide that Supergirl was solely a girl's magazine, and perhaps in keeping with DC editors' estimation of girls the quality suffered greatly.