The most famous villainesses you've never heard of 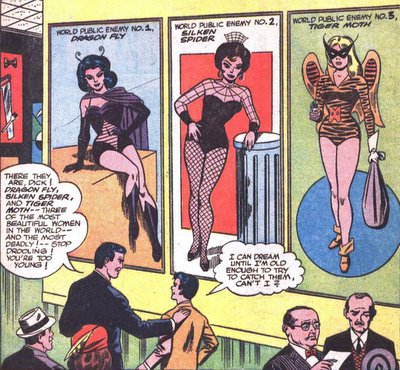 Posted by Marionette at 1:54 am

Yeah, Tiger Moth. Who could forget all of her classic confrontations with the Dark Knight? Especially that controversial Frank Miller tale...

hey, he can dream until he's old enough to try to catch them, can't he?!

Do I recall correctly...?

They were introduced simply so that another villainess (Poison Ivy?) could outdo them all on her first outing.

And Tiger Moth DID reappear, but in Batman Adventures, battling Batgirl.

Give that man a paper hat. Yes, I found this while researching an article about Poison Ivy. It's taken from Batman #181 which is Ivy's first appearance.

Those three are just WAITING for Gail Simone to bring them back, I say...!

I think they should be slightly older, just past the point where those outfits are appropriate.

Not that such outfits are EVER appropriate!

Funny you should mention inappropriate outfits...