Meanwhile, back in the 30th century

Adventure #315 presents us with a badly misjudged morality tale. The Legion in their infinite wisdom condescend to take one of the rejected members of the Substitute Legion by requiring them to compete against each other, and then in the end take the one that fails his task because he knows when to quit (1) over his companions who were not faced with the same moral dilemma, and who completed far more difficult tasks.

Adventure #316 includes a panel that hurts my brain.

So there is so little crime in the 30th century that nobody much uses the big room full of police records right behind you, super powered girls are so afraid to reveal their abilities for fear of kidnapping and being made to commit crimes, and oh yes, there's all those people who the Legion spend fighting every issue (2). This was my first intimation that the Science Police were not up to the job. 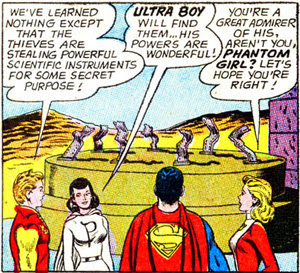 At least Phantom Girl gets her nineteen pages of fame this issue, after being so thoroughly ignored for so long that you could be forgiven for wondering if she's still a member; though being a girl this means she has to spend it swooning over a Ultra-Boy who seems to have gone bad (3). When Shrinking Violet gets her moment in the spotlight in a later issue it is also so that she can pine over a bad boy. 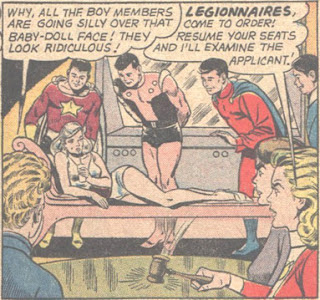 Phantom Girl has vanished again by next issue, wherein we basically get a rerun of #304 only with Dream Girl taking Saturn Girl's role. You'd think Saturn Girl might at least have got a feeling of deja vu. And they never do explain why all the male legionnaires are drooling all over Dream Girl at the beginning of the story.

This episode also gives the first insight into the Pokemon nature of the Legion. Lightning Lass's powers are conveniently altered but it's okay as her lightning power isn't needed because it's the same as her brother's. Considering how many stories revolve around rejected applicants it's surprising they don't get one who is mad that he can't join because there is already a member from his planet/with his ability.

The other thing that puzzles me about this issue is how is it that Shrinking Violet's clothes don't fit her when she is turned into an infant, but they do when she shrinks?

The oddest thing about Adventure #318 is that Sun Boy goes bonkers and everyone else lets him. All the complications of the plot derive from that.

Then we get an issue of Jimmy Olsen which consists of female legionnaires fawning all over Jimmy to make his date appreciate him. Do the Legion spend all their free time watching the time scanner like it was a reality show or a soap opera or something?

Next we get to a story that is so big and so stupid that it's going to need a post all of its own...

Notes
1) and has powers so pointless he makes Bouncing Boy look useful
2) okay, half of them are rejected candidates for membership out for revenge, but it's still illegal
3) it's only a trick, of course
Posted by Marionette at 11:39 pm

"And they never do explain why all the male legionnaires are drooling all over Dream Girl at the beginning of the story."

Does this actually require an explanation? They're male. She's Dream Girl. 'Nuff said. ;-)

"Considering how many stories revolve around rejected applicants it's surprising they don't get one who is mad that he can't join because there is already a member from his planet/with his ability."

It happened in Superboy and the LSH #212: a group of applicants from Durla, Braal, Bismoll, etc. are rejected for duplicating existing members' abilities, and band together to get revenge.

See, it's stuff like this that makes my head hurt whenever I try to read Legion stuff. I'm sticking to the Green Lanterns...where it's SAFE!