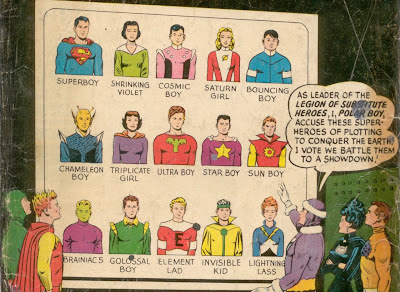 Since the Legion is composed not just of representatives from Earth, but from the entire Universe, you do rather get the feeling that the 30th century is a bit lacking in cultural diversity.

I realise that due to the prejudice of the time these comics were first published there are some parts of "the land of the free" where people would refuse to sell a comic that had a black face on it, but they could have thrown in a few pastel shades that the bigots wouldn't be offended by to at least suggest that the universe of the future wasn't almost entirely populated by white people. Of the sixteen legionnaires (guess which one is not featured on the big board here) and five subs who are supposed to represent maybe twenty different worlds, there are only two who are not white, and only one who has any physically different characteristics. And he's the one who can change himself to fit in whenever he wants.

And admittedly it's hard to tell when it's purely skin colour and you're reading a black and white reprint, but going by what I've so far read of this Showcase collection it appears that all women of the future are white Caucasians.

How boring.
Posted by Marionette at 1:13 pm

Email ThisBlogThis!Share to TwitterShare to FacebookShare to Pinterest
Labels: LSH

Hrmm..who's missing? Lightning Lad?
I think Shadow Lass would join after the time span your trade is covering which would bring the non-caucasian female count up to..one. Of course in her first appearance she has to fall for the only other non-caucasian in that issue (Brainy).
Not counting Ferro Lad, the first non-green, blue or orange member was Tyroc, he of the awesome costume. Then Dawnstar, Invisible Kid II and Karate Kid II. Although I contend that Chemical King was supposed to be Asian and would have predated all of them.
At least the later LSH had XS.
Oh wow, at one point in time, Invisible Kid II and Tyroc were the President and VP of Earth! (Then it got retconned)
The Legion of Super-Heroes! Not exactly diversity at it's finest!

The young lady looking at the screen has black hair and is dressed in black. I assume that means she's evil.

ALL brunettes are evil.

It is only 1000 years in the future-the African Space Program hasn't blagged enough dosh from the World Bank yet.

But in 3008 they are definitely holding another meeting to blame Western Nations on their lack of progress.

It was Phantom Girl who was missing, as usual. Technically, Supergirl would have done too, but although is is supposed to be a full member of the Legion, she's never listed unless she's actually present.

The girl in the black costume is Night Girl, who manages to stay good despite how mean the Legion are to her.

But she does have evil hair.