It's a small universe after all

The inhabitants of the the tiny planet Throon are entirely xenophobic and set up a barrier around their planet to prevent anyone visiting them. They haven't quite thought it through, though, as this barrier causes rocket motors to fail, which basically means anyone getting near enough is not so much persuaded to go away as stuck there without the ability to move, or worse, caused to crash on the planet.

Now this wouldn't be a huge problem in Star Trek. They'd just set up a warning beacon and everyone would avoid the area. The problem here is that not only is the universe a lot smaller than you'd expect, the mysterious planet Throon with its xenophobic occupants are apparently right in the middle of the spacelanes.

Yes, traffic throughout the universe is going to grind to a halt because there's a 60,000,000 mile diameter area of space that they can't travel through.

The furthest Mercury gets from the Sun in its orbit is 43,382,322 miles, so if you imagine the orbit of Mercury, the Throon exclusion zone would fit within that.

How small is the Universe when space traffic from one end of it to the other cannot bypass an area that tiny? And how is it that a planet of such immense strategic importance remains virtually unexplored?

Anyway, the Science Police are on the case. Unfortunately they aren't very good with crime, and there's probably some legal red tape about invading an independant planet's soveriegn airspace to sabotage their defence systems, so they call in a bunch of teenagers to do the job for them. A later writer might have used this story to make a point about sending young people off to war, but here it's just another day for the Legion. 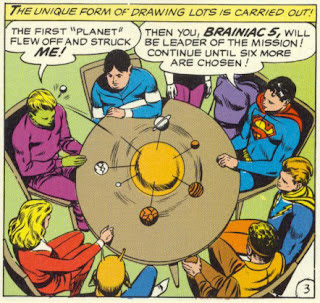 Deciding their best plan is to send in a small team to infiltrate the planet and destroy the force projectors, our heroes pick members for the team based, not on whose powers are most appropriate for the task, but the Planetary Chance Machine, a device that randomly fires out little balls to hit people on the head.

Proving that they are not entirely useless, the Science Police dig up a couple of people who claim to have visited Throon, but there's an odd gap in their information that becomes apparent at the end of the story. We are informed that the Throonians all live in one huge building and the rest of the planet is covered with dangerous jungle. 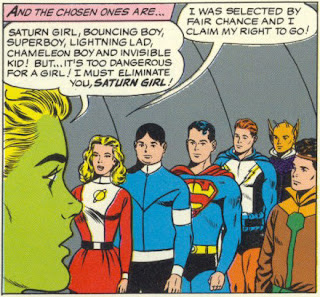 This is obviously a dangerous mission, and logic would dictate simply dropping large rocks on the force projectors until they break, but as far as the Legion is concerned it just means not letting the girls go. Though curiously, once the first team has been wiped out and the promise of danger has been fulfilled, none of the other male legionnaires try to shut out the girls.

The Throonians must have been expecting the Legion as they zap Superboy the moment he shows up. The rest of the team sneak around from the far side of the planet and then run out in front of the building. Their clever strategy is for Brainiac 5 and Lightning Lad to go one way as a diversion, while the rest of the team go another. It never occurs to Brainiac 5's amazing computer mind that they might be able to shoot in two directions at once, and so that's the end of the first team.

At this point you might be thinking "Why didn't Chameleon Boy make himself useful for a change and turn into an indiginous creature and try to sneak in?" or wondering why they didn't pick Invisible Kid for a stealth mission. Because then Night Girl wouldn't be the hero, that's why.

Meanwhile, the universe is grinding to a halt. People on distant planets are starving because they have given up all agriculture and are entirely dependant on imported food that has to be flown through Throon airspace. It's a bit like America being entirely reliant on imports that can only come via Gibralter, regardless of their origin. 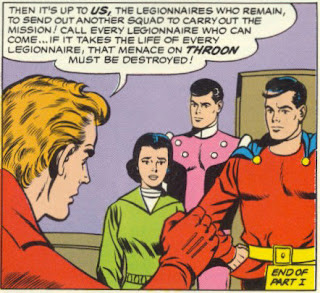 So with the first team flattened in short order, what's their strategy? Do they suggest to the Science Police that they nuke the site from orbit? No, they send in another team consisting of whoever happens to be left back at Legion HQ.

Again, they come up with a cunning strategy for getting close to the Throon building, and once there simply run out in front of it to get zapped.

Back on Earth, Legionnaires who were on missions in space have returned without going via Throon, which makes complete nonsense of the whole premise of the story. Having failed to learn any lessons from the first two attempts, 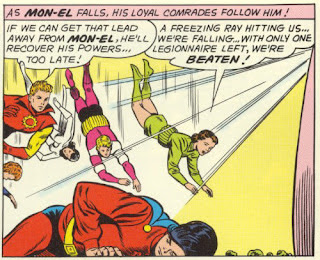 they send in a third group. This time at least they have Phantom Girl, who can use her powers to avoid being hit by the zappy rays that took out the first two teams.

Except no, she is infected by the secret invisible Throonian stupid ray that is an integral part of their defence systems and forgets to go out of phase when they are attacked, so she goes down too.

So finally all that's left are the Substitute Legion and those legionnaires they forgot to include this issue. They didn't even think to summon the Legion of Super Pets like they did to fight Satan Girl. 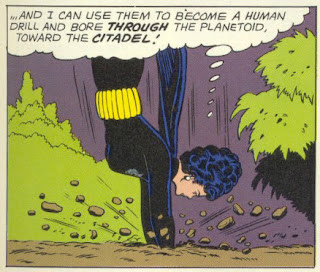 And since it's Night Girl's story, she doesn't run out in front of the building to get zapped by the defences, she burrows in underneath it to come up inside. So much for Brainiac 5's amazing computer brain. He never thought of that one.

She finds the vast building virtually empty, and discovers an important point that the two advisors had somehow missed; the entire Throonian civilisation is extinct apart from two 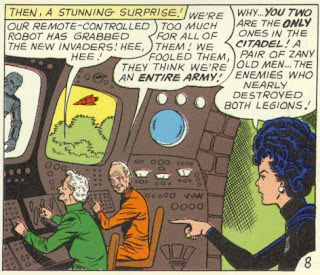 old guys. It's never explained how the rest of their race died out, and there must be one hell of a lot of automation to keep the place running and even install new defence systems when the only people left are a couple of mad old duffers.

So everyone lives happily ever after, and the old gits aren't even censured for almost causing the collapse of galactic civilisation and the deaths of many billions of people from starvation. And the Substitute Legion gets a tickertape parade for being not stupid.

Well, you know, old people need to have their fun too. Damn young whippersnappers!

On stopping all space traffic: maybe Throon is right near a Crazy Eddie point. (see "A Mote in God's Eye") In some sci-fi, faster than light engines only allow you to go from one specific spot which is very unusual for some reason to another such spot. If Throon is on a key node on the spaceway...

Excuse me, I've hit my geek-out quota for the day.