The Secret Origin of Exposition Girl

By the late 30th century a crisis is looming (no, not that one). The spread of information has reached a point where it becomes overwhelming. People are in danger of losing their own identities as they are drowned in the sea of knowledge that surrounds them. 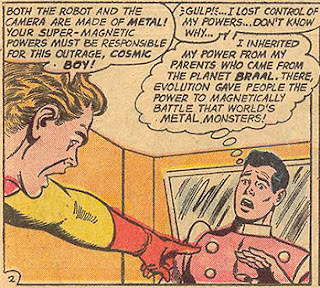 It becomes so bad that everyone has to constantly remind themselves of who they are and what they are doing in order to retain their own identities. A side effect of this problem being that everyone loses any nuances of personality, forgetting that they are untidy or have a favourite TV show. Popular culture dies overnight as people become more interested in their own doings than anything happening to some celebrity.

People take to carrying placards around with them that they can place in front of themselves to avoid the embarrassment of having to remind close friends of who they are. 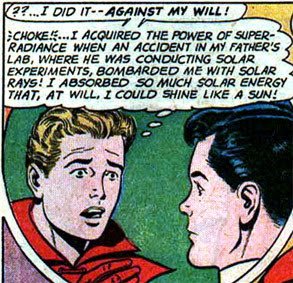 One villain attempts to use this to trick their way into the Legion of Superheroes by convincing the legionnaires that they are already a member, but succeeds too well and entirely forgets that he is not a heroic stalwart of the team.

It is amid this chaos that a new hero arises. Emo librarian Jenerica Jones gained all the knowledge of the universe when a freak accident caused the computer terminal she was working on to download the entire galactic internet into her head. 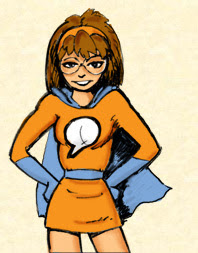 Donning a brightly coloured costume and cape, she is quickly inducted into the Legion where she serves the invaluable (if rather dull) purpose of reminding them who they are and what they are doing. She is Exposition Girl.

Exposition Girl picture by Karen Ellis who draws stuff.
Posted by Marionette at 12:06 am

I approve of this, if only because we need more librarian superheroes.

Barbara Gordon is not enough!