I'm skipping past a few Legion stories. It's not that they don't contain their share of odd legionnaire behaviour and entertaining nonsense, but I never intended to do a an in depth analysis, and there's a lot to get through. Here's a few highlights:

Lighning Lad spontaneously comes back to life, except it's actually his twin sister in disguise, who has stolen his corpse and taken his place in the coffin (1), which nobody notices until Sun Boy spots she doesn't have an adam's apple, rather than that she's an entirely different shape. I'm guessing she must have used some kind of 30th century bodysuit because when we see her not pretending to be her own brother she is not only a lot less muscled, but has the largest bust size of any of the female legionnaires. 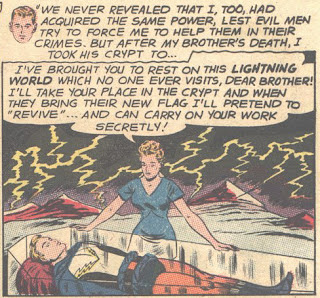 Even in what is often depicted as a utopian 30th century, women still live in fear of attracting the wrong sort of attention, and their plight is still largely ignored. Have the Legion ever fought evil men who have kidnapped super-powered girls and forced them to commit crimes? They just don't care. It seems like sometimes the only option is to dress up in your dead brother's clothes so you can carry on his work secretly(2).

What does it say about the Legion that when they catch criminals they feel perfectly entitled to walk off with any of the stolen goods that take their fancy? 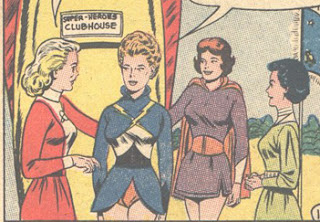 And I realise how they might be annoyed by Lightning Lad's nameless sister for showing up how poor their observational skills are, but making her wear that outfit seems an extreme punishment. Apart from being the ugliest superhero costume of the silver age, it seems to yell "Look at my pants".

The silver age Legion of Monsters didn't feature Dracula, Frankenstein's Monster, or even a werewolf, but it was still "the greatest threat to the Legion in their history". What, more than the threats that actually killed Legionnaires?

Isn't the universe depicted in this map a little small? Also flat? And who is missing from the Legion roundup this issue?(3) 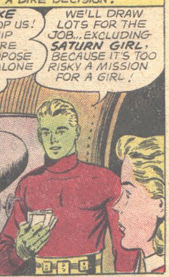 And it's too risky for a girl to go on this mission, even though she's the only one at that point to achieve anything useful, and is in fact leader of the whole Legion .


We'll send in Bouncing Boy instead.

1) None of the Legionnaires are at all bothered by this.

2) For individual values of "secret".

Brainy, your supposed to be the smart one! drawing lots?! What the grife?

By the time of the Legion the I-Ching has been totally validated, so making decisions in an apparently random fashion using lotteries or planetary chance machines is perfectly reasonable.

Disturbingly, in that picture, Lightning "Lass" has one of the largest bollock bulges in the Silver Age...