There was stuff I liked about this and stuff I was less than thrilled with, and quite a lot that I am willing to suspend judgement on until we've seen the whole story, because enough of it I did like. 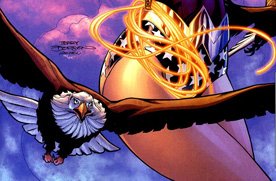 I'm still waiting to find out the significance of the mini eagles on the cover. You can't easily judge the size of most of them, but one of them is in front of Wonder Woman, and it's tiny. 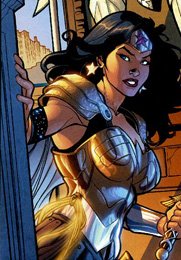 The story opens with a bang and I immediately have mixed feelings. It's a lovely double page spread, but it's the buxom Donna Troy. I don't like Donna Troy. She's one of those characters that are being perpetually reinvented and I have no idea who she is now, but I don't want her to be Wonder Woman. My fears are immediately increased as she gives us some backstory. In the new post-Crisis² version we are now told that Donna is Diana's sister.

It's been pointed out to me that right now we only have Donna's word for this, so it may turn out to be more complicated, but that's where we are right now. This seriously screws around with Wonder Woman's origin. Was Diana still sculpted from clay? And if so, did Hyppolita have another go a few years later with some leftover bits to make Donna? Either way Diana loses a lot of her uniqueness and Donna becomes no more than the spare Wonder Woman she plays here. 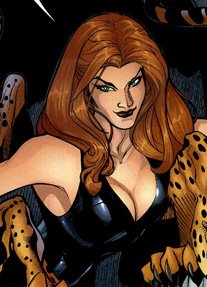 Enter the bad guys. The now-human looking and buxom Cheetah matches chests with Donna (Wonder Woman lite) Troy and wins. What, you thought that someone who regularly takes down gods and beings with enough power to change history by hitting it would be cowed by a couple of big pussycats?

We then get to the part of the comic I like best, and which has me falling about laughing. I haven't read any other reviews so I don't know if anyone else has noticed, but I think it's hilarious that the woman with the flattest chest in the new improved DC universe is Giganta. No wonder she prefers to be called Dr. Zeul. She is now officially my favourite villain. 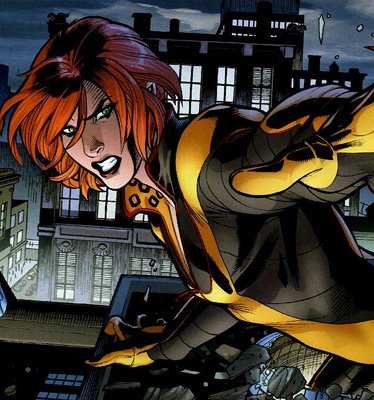 Partly I'm just delighted to find that there's room in the DC universe for even this small deviation from the regular female bodytype (see Buxom above). Of course I'd like to see a much greater range than is currently on offer, but it's a step in the right direction. 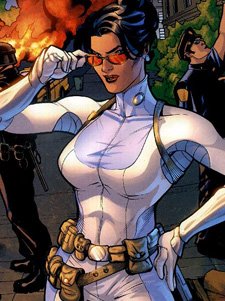 And after some entertaining back and forth on the last page we are intorduced to buxom Agent Diana Prince. Agent of what, I'm not sure. Should I know who this Nemesis guy is and would that explain it? Well I don't so it doesn't. But a kick ass Diana Prince in a completely white outfit?

Two questions I have for next issue: does she have the realistic kung fu grip, and where's the little old blind oriental guy?
Posted by Marionette at 8:20 pm

Okay, I'm gonna have to get this now, just to see if Diana opens a boutique.

BTW, wasn't there an origin for Wonder Girl back in the early Teen Titans days (I seem to recall a panel drawn by Nick Cardy) that said that Donna Troy was an infant that Wonder Woman saved from a fire? How many realities ago was that? I think I liked that one best.

Yeah, that was the original, Earth-1 Wonder Woman origin. (Saved by the Amazons, anyway.) So maybe they're just reverting back to that, and that's what "sister" means.

No, the original origin of Wonder Girl was that she was Wonder Woman as a teenager. The "saved by the amozons" bit was merely the first retcon.

I had this great idea for a Donna Troy origin that would have tied up all the loose ends without any retconning (except for all the stuff from all those retcons). It all involves the teenage Wonder Woman and a time machine...

I didn't notice Giganta until the second read-through, but I agree that's really cool.

Diana's origin is going to be in the backup of 52#12, so it should be clarified there. I suspect they'll go for more of the TV series style origin than the comics.

I don't think it screws it up too much, depending on how much younger she is than Diana. I think both sisters'll still be sculpted out of clay.

Of course, I also don't see how removing Etta Candy from continuity (as she hasn't done anything major Post-Crisis) and reintroducing ehr as a neighbor or coworker -- someone who's not military, who doesn't need to diet (Damn, that pissed me off earlier. "Hey, let's make the only fat person in the comic not only "pretty faT" but obsessed with her weight because women can't be comfortable with their bodies!") and isn't involved with Steve.

Oh, and Chris Sims is doing is a History of Nemesis feature for those unfamiliar with the character.

It was one of the things I liked about Marsha Mallow that although she was supposed to be on a diet (and continuously nagged about it by her thin roommates), it was quite clear that she didn't really care and was quite comfortable with herself as she was.

Nemesis is a great character that Devin Grayson was forced to kill off in an issue of Catwoman because DC had plans for the name.

He and Diana should make for quite a team.

"Ching! Look at that gorgeous sunset--Oh wait, I forgot..."

And I want his first name to be Irving. I don't know why.

You're quite right about "the first retcon", BTW. What I meant to say is that it was *Donna Troy*'s first origin.

I enjoyed this issue too. Not enough to say that I'll be sure to keep getting it, but I enjoyed it more than I thought I would. Maybe that's because I'm no WW historian and don't know much about Wonder Girl's backhistory, so I'm approacher her fresh. I liked the "Agent Prince" twist. And the twist at the end of the fight with Cheetah and Dr. Giganta. And the art was very pretty.

Wait, the Dodsons know how to draw more than one bust size? Everything I know... IS WRONG!!!