I'm kind of a binge reader. I have books sitting around for ages that I never seem to quite find the time for, maybe I'll read a couple of pages here and there. Then for no obvious reason I'll sit down and read 500 pages in a day. 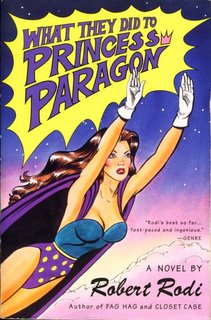 I'm currently at the "few pages here and there" stage with What they Did to Princess Paragon by Robert Rodi, so it may be a while before I get around to doing a proper review, but I wanted to say something about it now because although it was published eleven years ago, real life just caught up with it. See it's about the comic business. Specifically it's about how a thinly disguised analogue to Wonder Woman is relaunched as a lesbian. And the parallels to the current Batwoman situation are almost scary.

In an interview, the new writer of Princess P at one point says:

Of course in this story the whole thing is a cynical move to work up interest in a dull and failing title, where the writer believes that doing something so controversial will be good for his own career. It perhaps shows how much the world has changed in eleven years, or that the real world isn't quite as cynical as we sometimes think, that when DC announced the introduction of Batwoman, they did so with no fuss. It was everyone else that made a big deal of it.

The media frenzy and the fan reaction is very closely parallel, though the internet is not a feature of the 1995 novel, which dates it rather. There are hysterical and obsessive fans claiming the character has now been ruined or perverted, and one particular obsessive looks likely to play a major role in the story. It's a shame that all the comic book fans in the novel are stereotype losers, thirty year old men still living with their parents, lacking social skills or any life outside comics. Couldn't they have included mention of one or two more normal people who liked comics, or *gasp*, female comic readers? When someone is satirising the prejudice of others, it's a little irritating that their own prejudices are so blatant.

More to come when I get a bit further into the book.
Posted by Marionette at 12:04 pm

Good points. The omissions you point out are particularly odd in this case...because I used to know Bob Rodi in fandom, and I know for a fact he counted a number of female comics fans among his friends. Overall the treatment of fans in that novel was the weakest and most stereotypical part. It may be that he simply saw the book as a retelling of The King of Comedy with comics instead of television, and a more nuanced portrayal of fans would have gotten in the way of that goal...or maybe there was some personal embarassment over being a fan that made him project an unflattering self-image onto the rest of us.

But even with its flaws, Princess Paragon was still the single best depiction of the comics business I ever saw in a novel in the days before the manuscript of Kavalier and Clay crossed my doorstep. In fact, I even recommended to the author of the latter that he should check out Rodi's book simply to see the prior art in the field, just as a reference point.

I love this book. It really puts the onus of what's wrong with comics on the creators rather than the fans, which I appreciated. Yeah, there are some pretty fucked up fans in the book, but the main character gets off on screwing with them. To quote Roseanne Conner: "If I'm an enabler, you're a carrier."

I've never read it, but I remember Rob Rodi was a prolific contributor to the letters pages of both Marvel and DC in the 1970s.

Didn't he have a regular column at one time?