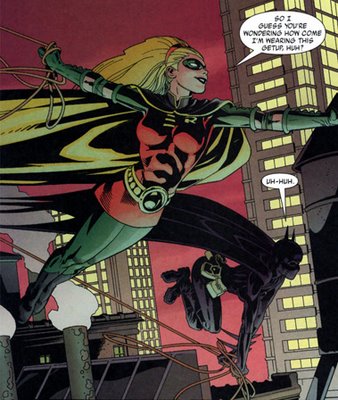 I have to confess I jumped ship some time before Stephanie died. I could see where the story was leading the moment War Games started and it was clear that she was going to be the one sacrificed to give the event impact and shock value and I couldn't bear to watch. Call me cynical but I'm pretty certain that she was only made Robin in the first place to give her a higher profile so it would make for a more powerful story when she was beaten to death.

It's a practice that's been overused at DC and long past time it was retired to the cliche cupboard. Killing off a long established character is not a substitute for good writing, and when you make a big deal out of it and then forget about them the moment they are gone, it just shows what a cynical marketing ploy the whole thing was in the first place.

Stephanie was Robin and died in a horrible way, but Batman has no memorial to her in the Batcave like he did for Jason Todd. DC have no action figure of Stephanie as Robin, but they do one of Black Mask, who murdered her. He even comes with accessories like the power drill he tortured her to death with.

And that just makes me feel nauseous.

These guys feel the same way:

Because capes aren't just for boys.
Posted by Marionette at 1:07 pm

I felt sorry for Steph as well; she was never given a chance. At the risk of p#$$ing off Cass fans, I would have rather seen her as Batgirl than Robin.