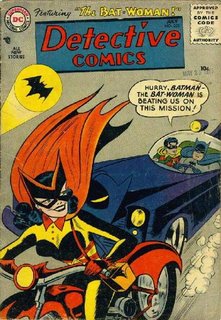 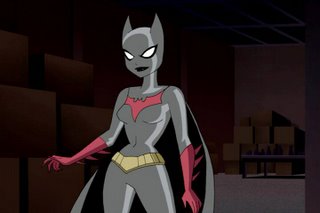 This is the official image issued by DC of the new Batwoman used in their press release. 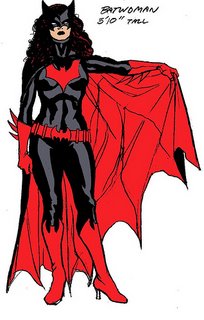 This is the image used by the australian Daily Telegraph in their report about the new character. It is a poster for a mexican film made in 1964 that was not licenced by DC. 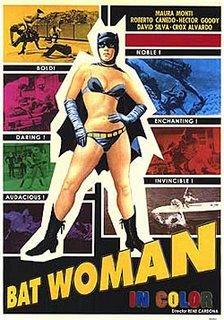 This is the image used by Pravda in their report of the new character. It's from a website that features images of girls dressed in minimal costumes based on comic book characters. It is unlicensed by DC. 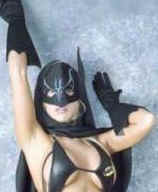 This is the image used by the Metro newspaper to report on the new character. I do not know where it is from but I believe it is a piece of fan art done several years ago. It is of course unlicenced by DC.

What do these images have in common that were used to illustrate news articles about the new Batwoman?
1) They are not the character the article is about, and in fact were all produced long before the new Batwoman was created.
2) They are all eroticised depictions of a woman in a Batman style costume.
3) They are all unauthorized images and probably in contravention of DC's copyright.

The only reason they have used these images that I can possibly see is to play up the fact that the character is a lesbian and imply that her sexual adventurings will play a major role in the story and be visually depicted in a way entirely innappropriate to the comic she will be appearing in, which they must know will not be the case. Would a newspaper get any credibility if they illustrated an article about the new Superman actor Brandon Routh exclusively with images of random muscle men in Superman themed posing pouches and speculated about the kind of sex he likes?

So much for fair and accurate reporting of the news.
Posted by Marionette at 8:40 pm

Yes, when such bastions of journalistic integrity as The Daily Telegraph, Pravda and Metro are involved, the problem must be far-reaching indeed. Misleading as the images might be, I'm in fact positively surprised by the fact that none of the papers mentioned used a headline like "Kids at risk: Major comic publisher lures children with sordid tales of sexual deviance".

Every paper I've seen covering the story has pretty much used a verbatim copy of the press release with either no image or the official image accompanying it. Then again, I live in Norway, so the fact that they're even covering a comic which will most likely never see print around here is pretty impressive - I guess it's a combination of the prevailing popularity of comic-book movie adaptions and the fact that the word "lesbian" still attracts readers.

Well, it is a fun word to say.

Artists are not scaling back on the hyper-sexuality of women in their art but are in fact ramping up the visuals for male characters as well.

Just to make all things equal.

I have no problem with the portrayl of men or women as sexy. What I am complaining about here is the blatant lying.

On a much more clever and subtle level stories about celebrities or politicians sometimes include photos that are particularly unflattering in order to make them look bad. At least in these cases it is the right person, but just caught in an awkward moment, but it's still not right.

I just boggles me how a press released statement and peice of artwork can't both end up being used and printed together...

Surely it would have taken longer to find these images than just using what DC had supplied.

But DC's image won't have the effect on its readers these editors wanted...