Okay, I know DC like a good retcon, and surely Superboy Prime's history punching should be shown to have more effect than just adjusting some of the backstories of a few people in tights, but if you are going to write Galileo out of continuity then I personally think it shouldn't be done in a throwaway caption. 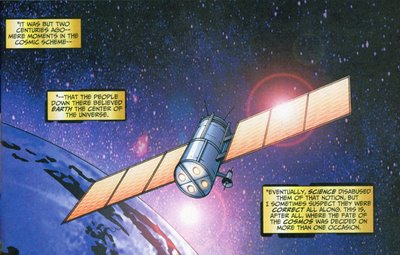 --That the people there believed Earth the center of the universe.

In the eighteenth century? You think?

Eventually science disabused them of this notion,

I wonder what other historical retconning has occured. And is adjusting cosmology so that it's not until the period of the american civil war that it is established that the Earth revolves around the Sun a step too far? Is it an example of american imperialism to rewrite historical events to a time period where they can be attributed to americans?

Enquiring minds are all agog.
Posted by Marionette at 8:19 pm

You have to remember, schoolchildren are still taught how Columbus "discovered" that the Earth was round...even though Eratosthenes had measured the circumference of the globe 1700 years earlier, and the shape of the Earth was widely known centuries earlier than that. So what's a difference of two piddling little centuries compared to misinformation like that?

You could even push it back another 100 years. Nicolas Copernicus (1473-1543) did the math and had the theory; Galileo made that observations that confirmed it.

I don't think it was accepted as fact as soon as Galileo posited the idea. I believe that's why the church put him on trial for heresy.

Actually, a lot of ancient peoples played with the heliocentric theory, in India, possibly Egypt, and Greece (cf the philosoher Aristarchus who lived 200 bc). of course these theories weren't widely accepted, but it's an old canard to say that the geocentric theory was all there was until galileo.

I think galileo got into trouble for discovering sunspots. The sun and planets were supposed to be immutable. and for discovering Jupiter's moons. The planets and sun were supposed to be embedded in crystal spheres. Moons shattered the spheres. If he got in trouble for the Earth moving around the sun it was for repeating what Copernicus had reported.

Wallace is credited with the theory of Evolution rather than Darwin in the new continuity.

C'mon, folks, play fair. We all know by now that if it isn't Euro-American history, then it isn't real history. That's why we give everyone else special months.

Don't you people know any history?! Ben Franklin discovered the Earth revolves around the sun. When he was President, he set up a telescope on the White House lawn.

Given that this bit is being written by someone who couldn't keep Barry Allen and Wally West straight... either that or Barry Allen died twice... I think we can safely discount anything in there being canon.

Mind you, at least THEY mentioned Stephanie Brown being Robin...

Paging through the Superman/Batman issue I picked up on Free Comic Book day, I noticed Pluto's companion sphere was labeled "Phobos" in a big computer display. It made me blink a bit.

You just have to take into account the difference between superhero comics time and our time.

So Gallileo still DID prove the Earth moved, only in the DCU he did it only 200 years ago.

There's just been 400 Christmases in that time.

Galileo is tried for heresy not over a matter of fact, but over a matter of authority. He doesn't help when he casts the represerntative of the Church's position as "Simplicio" and the guy who puts forward his views as, oh I forget- means "Smart Guy" in what was supposed to be the non-partisan "Dialogue concerning Two World Systems". After this the current pope (who is his pal, which is why Galileo is being quite so cocky) politically can't help protect him any longer.
Anyway as well as Galileo, all those guys and cultures failed to consider that the Earth was not the center of the universe. I mean those guys were Monitors! They must have a least googled it before they began their extended metaporic muse.