Intruiged by her appearance in the new series of Wonder Woman, I was looking into Giganta's backstory and was surprised and more than a little confused by what I found there.

Giganta's first ever appearance in Wonder Woman v1 #9 is such an amazing story that it needs a post all on its own. Possibly several. Suffice to say here that in her original incarnation she is a gorilla who is artificially evolved into a large, strong human woman. She later teams up with other foes of Wonder Woman to become part of the original Villainy Inc in WW v1 #28, but is not then seen again until #163 where her story is revamped a little and Dr. Psycho is thrown into

the mix, she gets bigger and goes blonde. Apart from appearances on Super Friends TV show (why pick Giganta who had only been seen once since the 1940's?) she vanished into obscurity again for several decades.

When John Byrne reintroduced Giganta in post-Crisis¹ continuity (WW v2 #126) he made her much more pro-active. The golden age Giganta was the experimental subject of Professor Zool. The new Giganta was Dr. Zeul. Instead of the victim of a mad scientist she had now become the mad scientist herself. In this version her motivation was desperation. She was dying of some vaguely unspecified disease and wanted to cheat death by transferring her mind into the body of Wonder Woman. I didn't quite get this part since at the time Wonder Woman was also dying, but we soon find that Dr. Zeul isn't exactly playing with a full deck.

Her attempt to possess the Amazon's body is thwarted and she appears to have died, but in fact her mind/soul/essence or whatever has been safely stored in some kind of battery and her faithful sidekick Bronson, doing an Igor to Zeul's Dr. Frankenstein, transfers Zeul into the body of the ape Giganta they happen to keep in the lab (WW v2 #136). She then has a brief fight with Wonder Girl and is not seen again for some time. 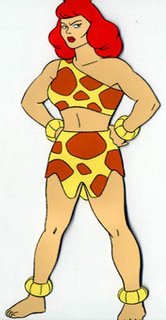 We then get one of the most hamfisted pieces of continuity I've encountered in a while. Unless I've missed an appearance somewhere, Giganta is next seen in Wonder Woman v2 #175. She now most closely resembles the Super Friends animated version; a giant woman with a two piece leopard print outfit and big bracelets. It is not until #180 that we get any kind of explanation. Here we are told how circus strongwoman Olga is put in a coma by a shaman. Why we are given this detail I don't know as we never get to find out what the shaman was up to or what Olga did to upset him. All we get to see is the comatose Olga is stolen by Giganta the ape. The implication is that Dr Zeul then transfers her mind from the ape into the body of the strongwoman, but decides to keep the ape's name for no obvious reason. There is also no explanation given for the size changing powers. Did Olga already have this ability? We don't know. The next thing we hear about her is that she is now acting as heavy in Villainy Inc. who have taken over Skartaris. In fact we are told they have been there several years, so what she's doing in #175 at all is a mystery.

Subsequently Giganta appears now and again, even acquiring a first name, Doris in Flash #219, but she is largely ineffectual and usually either the heavy for someone else or the warmup act to give the heroes a chance to swap witty banter before the real villain shows up. If she is given any characterisation at all it is "big and stupid", even in the usually excellent Justice League Unlimited animation. But then Byrne's original characterisation was of the cardboard psychopath mad scientist happy to use her loyal follower as cannon fodder, so it's not really that much worse. 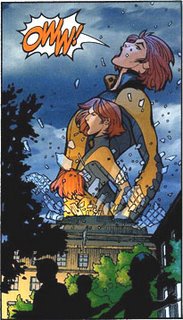 If Infinite Crisis did anyone any favours, Doctor Doris Zeul was high on the list. They might have reduced her bust size to the point where the other supervillains sniggered about the inappropriateness of her name behind her back, but Alan Heinberg and Terry Dodson have realized her potential and given her back her brain. I'm not wild about the jumpsuit, but it's more appropriate to an intelligent Giganta than the strongwoman outfit. Her past may have been a bit spotty, but it looks like she has a great future ahead of her.
Posted by Marionette at 11:17 pm

I read Warlord as a kid, starting around the time young Dan Jurgens took it over. Mike Grell had already checked out, and it's not unfair to say the book would never be as good again. Actually, it kind of lurched along for something like six years. With Power Girl (!) and Scavenger guest shots.

I salute DC's diversity, great books like Warlord, Jonah Hex, Sgt. Rock, Enemy Ace, the Haunted Tank...what do all these books have in common? Crossing them into the DC Universe proper, at least 7 times out of ten, completely sucks the life out of both concepts. (One exception I love: seeing all of the above in the background of the original Crisis, looking confused.) Plus, it strikes me as...not fair to take over Skartaris, when the Warlord does have his own book to fight it off.

Phooey. Sorry to ramble on, but thanks for the update!

I love your blog.
You're a GIGANTaic Artist.
Congratulations from one WW fan to a Giganta fan.

Oh My Fucking God I Have A GIGANTIC HARDON for your site.