Not a small town in Scotland

I've always considered space opera and sports to be a bad combination. When differences in climate of our own planet are enough to ensure that some nations will never excel at some sports, the idea that every alien race is at such a close physical or technological level to make for a viable competition is one step too far for my suspension of disbelief. 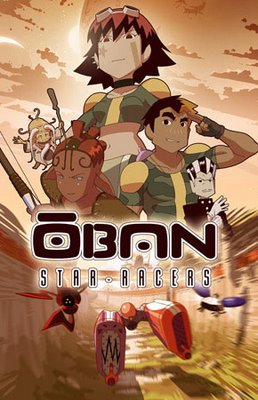 And yet I find myself enjoying Oban Star Racers. Of course the Earth team are going to win the competition, no matter how often their star racer is crashed, blown up, or chopped in half. But will teen pilot Molly ever reconcile with coach Don Wei who is unaware that she is really his daughter? Will Don ever come to terms with his wife's death while piloting a star Racer? Will gunner Jordan ever get a clue? Will the cute alien prince Aikka side with the Earth team when the chips are down? And is the Earth really doomed if they lose the race?

All this takes place on an alien world that really looks and feels alien, with a range of competitors that each have a distinct style gives the story a depth and richness you rarely see in TV animation. And the races are exciting to watch, too. There's enough variation to make each one different, but enough similarity that you know when they are nearing the finish line and it's our heroes' last chance to make the move that will win them the race or cause them to spectacularly screw it up.

One odd thing I've found while looking up Oban on the web: The show has been running once a week in the USA since June and has 5 episodes to go before it finishes, but although it only started a few weeks ago on Jetix in the UK it is shown 5 times a week. At this rate the final episode will be shown in the UK before the US.

Posted by Marionette at 8:31 am