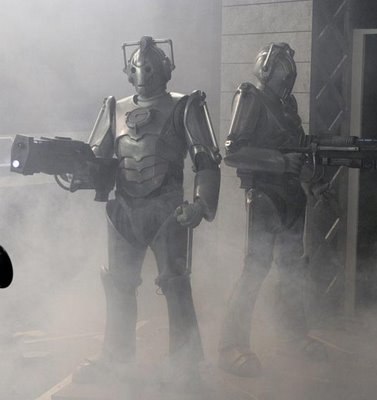 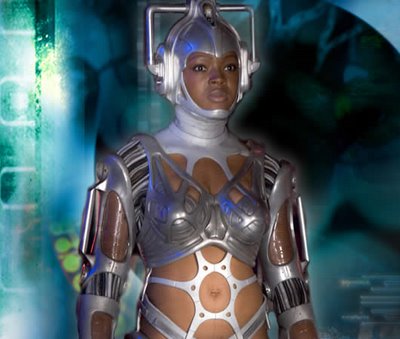 Discuss.
Posted by Marionette at 10:46 pm

It really is quite pathetic, isn't it? Proof that despite its aspirations to be a more mature version of Doctor Who, Torchwood is nothing of the sort.

To be honest though, the Cyberwoman didn't disturb me nearly as much as one of the "heroes" getting away with using an alien date rape drug in an earlier episode.

Oy. And Torchwood was doing so well, too.

The Doctor Who episodes with the Cybermen did this much better; the part where the guy's wife was turned into a Cyberman, and he's all "Which one was she? Which one?" because they're *all exactly the same*.

Being fiscally challenged, cable is luxury and internet nessecity, but I have to say the cybermen have come a long way, but wow, cyberwomen are a step beyond. Yes, it is fascinating that these aliens would need the flesh tone and soft tissue.

I guess I could Google (tm) Torchwood...

Well, let's be fair, the Cyberwoman shown in the second picture had only been partially cyber-converted (or whatever it's called). It was said in the episode that, because the Cybermen were desperate for soldiers, they began grafting cyber-components onto bodies instead of transplanting their brains. Hence the exposed flesh.

Still, the cyberwoman did seem to be somewhat unnecessarily "sexed-up".

Cybermen were desperate for soldiers, they began grafting cyber-components onto bodies instead of transplanting their brains.

Which is what they traditionally did before the last season of Doctor Who turned them from the gradual product of dehumanising medicine into knock-off-daleks from another dimension. Marc Platt's excellent Doctor Who audio drama for Big Finish, Spare Parts*, examined the entire concept with far more intelligence.

But anyway; if it was a matter of pragmatic necessity and cold logic why didn't they just lop off her breasts rather than fit a push up cyber-bra? And why fit high heels? They're hardly practical footwear for a soldier.

The whole outfit just seems to be robot fetish.

*Really. It's terribly good and very touching. I'd recommend it to anyone even remotely fond of Doctor Who.

If I remember correctly, the Supreme Borg (whatever her name was) was also rather fond of bondage outfits. It must be an unfortunate by-product of splicing super-advanced nannite technology with XX chromosones.

I haven't watched the new Who, but best guess: it's psychological warfare: the average human will have no qualms about blasting away at an evil robot, but may hesitate at a crucial moment in shooting a Cyber-woman.

Ah, I tried there, but it's dumb. Sorry.

I did a little looking around to see what this show was about, and it seems like it is aimed at a much more "adult" market. Here are some comments from a thread I found:

"As for the series itself? It's great. However, I wasn't expecting all the sex(straight, gay, blah blah)"

"This show is the Dr Who spin off, but it airs at 9pm, which is the adult watershed here. It is aimed at a more adult audience as a result from what i understand"

And here's a quote from series creator Russell T. Davies posted on the Wiki entry (http://en.wikipedia.org/wiki/Torchwood#Themes):
"He'll shag anything with a hole. Jack doesn't categorise people: if he fancies you, he'll do it with you."

In other words, I'm surprised the Cyberwoman is wearing as much as she does. :P

ooh, ick. I can't stand looking at navels. And that one has a piece of metal all around it and pointing at it. Ick.

The difference? Well, the Cyberwoman is FRIGGIN' HAWT!

The Cybermen gave her high heels?! I guess she's ready to model for the cover of "Omni" now.

My question: does her navel talk? Because it looks like it has something very important to tell us all.