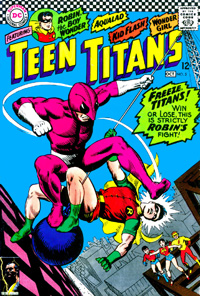 in issue #5 the Titans get into a seriously mismatched fight with a villain called The Ant. In theory the Ant doesn't stand a chance. All he has going for him is a level of acrobatic skill (like Robin) he inherited from his acrobat mother and the strength he inherited from his father who was a circus strongman (1) and some suckers on his boots that allow him to climb walls.

My knowledge of Herolix is barely above zero, but I'm guessing that if you set up a Heroclicky fight between the Ant and Robin it might be an even match: Robin is more experienced but Ant has the wall climbing thing. Pit Ant against Wonder Girl or Kid Flash solo and Ant doesn't stand a chance. So how come Ant gets to defeat the entire team twice (2) in this issue? 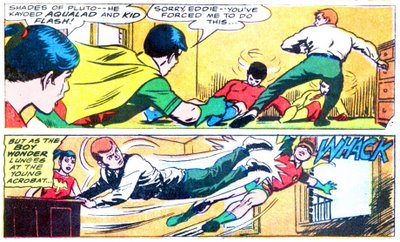 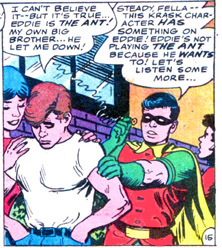 By this issue recurring themes are starting to become apparent. The Titans are summoned by some authority figure to save some teenagers from going bad. The teens are always good guys even though at some point they appear to be on the wrong side of the law. The teens are always virtually all male (3).

I wouldn't go so far to say Haney is misogynist (4) but he is sexist. It's almost painful the way he continuely attempts to obscure the fact that Wonder Girl is the most powerful member of the team. It's as bad as his efforts to hide how completely useless Aqualad is. Perhaps he assumed that only boys would be reading the comic, and they wouldn't want to look at pictures of teenage girls, and it certainly wouldn't do to have a girl who was more powerful than the boys, but if so, why add her to the team in the first place?

The one thing that really puzzles me this issue is the cover, which suggests some kind of personal grudge match between Robin and the Ant. Not only does the scene not occur in the story, but there is nothing personal between the two.

1. because in Haneyworld you can inherit learned skills and the results of exercise from your parents.

2. once when he's not even in costume.

3. Even when the teens in question are the entire teenage population of a town. What does smalltown America do with its girl children?

Wow! Look at young Guy Gardner go! Oh, oops. Well, really, my Grandmother could have taken out Aqualad, and maybe Kid Flash tripped or something.

Actually, in Heroclix, Ant and Robin would be a pretty even match.

The mechanics for wall-crawling are exactly the same for using a grappling hook to get to a rooftop. It's called LEAP/CLIMB and most of the Bat-Family have it for at least some part of their dial. But all that ability is really useful for is being able to "jump" to higher or lower levels on the map without needing a ladder, stairs or a flying hero to carry you.

Still, Robin can usually beat anyone simply because of OUTWIT so long as he keeps his distance.