Reasons to be Teens (part 4) 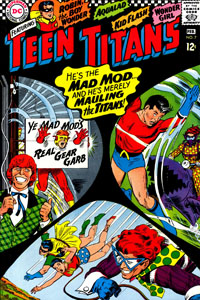 In the silver age DC wasn't big on character development. Which is not to say there wasn't plenty of characterisation. Look at Superman or Batman and each member of the regular cast has a distinct and individual personality. Early Teen Titans, on the other hand, is so completely plot driven and devoid of characterisation that three of the four members could not be told apart from dialogue alone. The exception, by an odd quirk of sexism, is Wonder Girl.

Wonder Girl's head is full of pop music and romance and nothing else. She pins up pictures of pop stars on the Teen Titan's notice board and spends any time she is not jiggling to the latest tunes in mooning over whatever male she has most recently noticed. Ghastly as this may seem, in portraying Wonder Girl as a bubble headed bimbo, Big Bob Haney has given his token female more depth than the rest of the team put together, as they have no interests at all.

Once again in issue #7 the Titans are called up by a government department. This time it's the Treasury, and the latest in a series of faceless government employees assigns them to go on tour with Wonder Girl's latest crush, pop star Holley Hip as they suspect Holley of smuggling, though any regular reader knows that he will turn out to be an innocent dupe. They fly to London, bringing pop music to the poor deprived british people who didn't have any of their own in 1967, unless you count the Beatles, the Rolling Stones, the Who, and possibly Pink Floyd.

Arriving in London, Holley's clothes are taken to his tailor. The Titans suspect something is going on but at no point does it occur to them that your tailor delivers your clothes to you rather than the other way around. The tailor is in fact Mad Mod (not quite the Mad Mod seen in the Teen Titans cartoon), fashion guru of Carnaby Street, who must be making so much money legitimately that there hardly seems any point to him smuggling stuff in the clothes he makes for pop stars.

As usual the Titans get to fight the non-super powered Mad Mod and lose, and he is eventually defeated by Holley hitting him over the head with an oddly bendy guitar. You begin to see why they are only sidekicks.

Okay, I'm beginning to understand why Dick Grayson-Nightwing was later portrayed as an incompetent who can't win a fight. It's totally in character for him when you think about it. :-)

Who is Donna turning around to look at there? Is it us? Was she pioneering that hip 4th wall breaking stuff?

Hi back Wonder Girl. Ask the Mod if he can make you a costume with sleeves...

She thinks she's in LAUGH-IN and is doing a "take".

The next panel has her saying "Sock it to me."

(And the sad part is, I have to point out that the above was a joke because it's too plausible.)

Was the Mad Mod related to Arcade, per chance?

Lurker & Evan: Wonder Girl (it's a year at least before she gets any other name) is actually having an "oooh, shiny!" moment as she has just noticed the lifesize cutout of Holley Hip that is standing in the middle of the room.

Jon: Mad Mod predates Arcade by a decade at least, but I don't know if he did the whole funhouse of death thing before the TT cartoon. His schtik here is having an ugly, tasteless suit for every occasion, which I refuse to believe could have been considered fashionable even in 1966.