The real secret origin of the Teen Titans

After reading through the Teen Titans there's one thing I don't understand (1). How did Wonder Girl ever get to be a member? The other members are always belittling her. She is always the last one picked to do anything unless it's "girl stuff" or flying. And even though the male Titans are strangely uninterested in girls most of the time they do occasionally get hormonal twitches, but none of the guys are remotely interested in Wonder Girl, and while she thinks romantic thoughts about any male that occurs to her, the other Titans are a total blank spot to her.

In their first adventure Robin, Aqualad, and Kid Flash are thrown together by circumstance and become friends. They decide to form their own little club and the only other person they invite to join is a girl that none of them is interested in or has ever apparently met before. How did that come about then? (2)

So maybe they all secretly have the hots for her but they are intimidated by her much higher power levels, and daren't make a move on her for fear of getting their arms broken and dropped from a great height, but I think the answer might be much simpler and more logical. 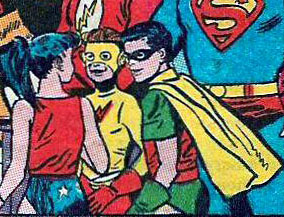 The Justice League of America's original lineup (3) was Superman, Batman, Wonder Woman, Martian Manhunter, Aquaman, and Flash. Of these six, four had teenage dependants (4), who are Aqualad, Robin, Kid Flash, and Wonder Girl (5). They never get to go along on JLA adventures, so where are they when JLA stuff is going on?

You know what it's like when you are a kid and your parents get together with some other kids' parents and you are forced to spend all afternoon with a bunch of kids you don't know, don't like, and would never be in the same room with if you had the choice? That's what the Titans are, and that's why Wonder Girl is a member. The Teen Titans is the Justice League's day care center.

1) Actually there's plenty that makes no sense to me, but this question keeps recurring.

2) I am aware there is a later retcon in which all four teen heroes are thrown together by circumstance, but I'm not buying it.

4) technically five, but Superman has stuck his young cousin away in an orphanage and is pretending she doesn't exist so he can keep milking the "last survivor of Krypton" thing.

5) Wonder Woman's relationship with Wonder Girl is a lot more complicated since they are both the same person, and in fact Wonder Girl had been retconned out of Wonder Woman completely before Teen Titans #1 was even published, but that's a whole other story. Come to think of it, it must be at least 10 years before Wonder Girl is ever mentioned again in Wonder Woman, by which time they've forgotten she doesn't exist.

Posted by Marionette at 1:43 pm

"The Teen Titans is the Justice League's day care center." Finally! It all makes sense now! Is it me, or do they all look about 10 years old in that picture?

Its not you. The massive inconsistancies in character origins are why I actually thought the original Crisis was a good move. Of course since then they've apparantly found ways to have Donna Troy's back story make even LESS sense...

COMIC URBAN LEGEND: Wonder Girl was added to the Teen Titans by mistake.

Jack - Unusually for Comics Should Be Good, their piece is entirely supposition and not backed up with any evidence.

I'm not convinced it was a mistake at all.

I'm not sure it was even Haney's idea to include her as he avoids using her wherever possible, so I suspect it was an editorial decision. They thought it would be a good idea to have a token female and the only possible choices were Wonder Girl or Supergirl, and Kara would have been even more powerful.

Continuity was a lot looser in those days, and there just weren't any other female characters available who would qualify. The obvious answer now would be to create a whole new character to fill the role of token girl, but at the time DC only gave team membership to established characters.

when Snapper Carr os forced out of the JLA he becomes the babysitter for the TT. That would explains all their stupid "hip" dialogue in the TT from the late 60s. Snapper is too embarassed to be seen on panel.