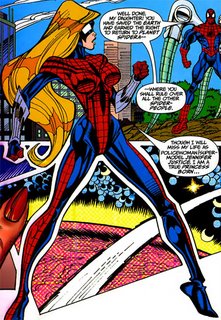 Since fan pressure contributed to the survival of Spider-Girl and this new relaunch, it's not so unsurprising to see this comic open with some fan in-jokes and subtext. Amazing Spider-Girl is concrete proof that fan support makes a difference, and you don't have to look far in the online community to find the source for the opening scene which makes fun of the stereotype portrayl of comic superheroines.

But it couldn't possibly be anything to do with the ongoing feminist comics debate, could it? Because people keep trying to tell me how that has zero effect on the industry.

In fact the scene isn't nearly as funny as it could have been. The supposedly absurd version of Spider-Girl made up by Mayday's friends wouldn't stand out in an average Marvel comic, let alone be seen as extreme enough to be a joke. Her breasts are smaller than her head, her pose is stiff but not back-breaking, and she's not even wearing heels. The text defines her as "policewoman/supermodel Jennifer Justice". Now this may have been a poke at quantum physicist/supermodel Stormy Knight, but either way it falls flat because the non-parody version is funnier.

Costume-wise, the only difference is the smaller mask and long hair that makes her look a bit like Spider-Woman, but possibly the biggest reason it falls flat is that there's no image of the real Spider-Girl anywhere in the story to contrast it with. Maybe Tom De Falco just doesn't write humour very well.

Once we get into the story it moves along apace. I haven't read the previous 100 issues, so I was pleased to find that characters were introduced in a way that did not assume prior knowledge. I'm not sure how well it reads to someone who knows all the backstory, though. The story set up takes what is to be honest a fairly dull plot for a superhero story and makes it work by making the characters engaging so that you are interested in what is happening to them. Mayday gets to jump about a lot but still hasn't got into costume by the end of the issue.

Is there enough in this first issue to get new readers to come back for more? I'm not sure. If it was me I'd have gone for something a bit more flashy than a riff on The Maltese Falcon. Have they purposely gone for a non-superhero style to this story? Nobody uses super powers (apart from May doing an urban Tarzan), nobody wears a costume - and no, I don't count the guy in a suit and tie wearing a hobgoblin mask; that's only a costume in 1940's movie serial terms. Putting Spider-Girl on the cover is as misleading as any Emma Frost cheesecake art.

I kind of liked it, and I'll be back to see what happens next issue, but it's going to have to move up a gear or two to get me coming back for issue #3.
Posted by Marionette at 5:50 am

I don't know anything about the Spider-girl flap, but that woman in the last panel does look atypical for a comics heroine. By the way her sweater hangs, it looks like she's being depicted as pretty small-chested, and her legs look muscular, like a runner's. She actually reminds me of one of my friends.

I haven't seen the whole issue, but that one picture looks promising, at least for visual depictions.

I liked that they dropped the annoying second-person narration.

I'd like it better if the comic wasn't still written by a 60 year old guy. Granted, I think DeFalco has it in his contract that they have to keep him on the book, since he created it, but...

I always considered DeFalco to be well-meaning and earnest, but a bit hamfisted in his writing. It was never enough to make a point, he always had to beat you over the head with it.

I enjoyed it, and I'm a long-time reader. It included some new "backstory" as well; the gap between the end of the old series and the beginning of the new one seems to have passed in real-time.

"I always considered DeFalco to be well-meaning and earnest, but a bit hamfisted in his writing. It was never enough to make a point, he always had to beat you over the head with it."

Tom "learned" all his tricks from Smilin' Stan, but has yet to figure out that won't cut it today. What surprises me is that Marvel keeps him on the book. I mean, yes, the digests sell, but why not try to goose the sales for the ongoing by hiring a writer who's actually in tune with teenagers?

I like Defalco. If they have him replaced, I bet you ten bucks may will end up a stripper by the next issue. I fear for the future with a new writer.

While that might be a point in De Falco's favour I am left wondering why any other writer might make her a stripper. Not having read the previous series I don't know if she has some expertise in this area, or some past history of stripping. Or do Marvel heroines routinely take up this career path? Because on the face of it this claim seems about as likely as suggesting another writer would make her a fighter pilot.

So I'll take that bet.

It's definitely true that DeFalco doesn't do subtle, but on the whole, I really have enjoyed his work with Spider-Girl.

Could another writer do a better job of portraying teenagers? I'm sure there are at least a few, the writer of Spider-Man Loves Mary Jane (Sean McKeever?) coming immediately to mind. But honestly, I'd be worried that new writer would bollox things up and leave me disappointed.

I figure there's something to be said for sticking with a known quantity.

Marionette, of course I was being silly with the remark about becoming a stripper; however, what I was implying was that Spider-girl will recieve more respect under Defalco than almost any other writer. Her comic has been pretty strong for the entirety of the run, but when new writers come, they tend to ignore bits and pieces of her developement in favor of something they percieve to be good--they ignore the people that made the comic popular.