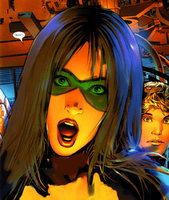 It's easy to spot examples of something when you are particularly sensitive to it, so I try not to overreact when I encounter what seems to be misogyny in comics without checking the context. Like Battle for Blüdhaven has a high bodycount, so it's inevitable that there will be female deaths as well as male deaths, so is it overreacting to see a big bias here?

I expect someone's annotated the whole thing on some corner of the web, but I can't be bothered to hunt it up. Lady Liberty is the only person to die in issue #1 depending on whether you count Silent Majority, who has multiple bodies. Is the Silent Majority who appears in #3 the same person or a different one? Unlike with Lady Liberty, it's impossible to tell.

The six Atomic Knights who appear at the end of #1 include one female member (as far as I can tell). She is the first to die. Only one other knight is defeated (I think). S.H.A.D.E. is introduced and of the eight members only two are female, including a new Lady Liberty. She will die later, in a way that echoes the death of the previous Phantom Lady in Infinite Crisis.

In issue #3 a bunch of Knights are blown up. One is saved for later torture. Guess what, it's the one female member of the group. The only other person tortured by the evil Face is Firebrand, who somehow escapes without a scratch. The female knight is battered and bleeding before the torturer starts on her. She is never seen again. In fact the Knights have a disturbing disregard for the lives of their comrades, but it is particularly noticeable here. Nobody is going to come rescue this damsel in distress. 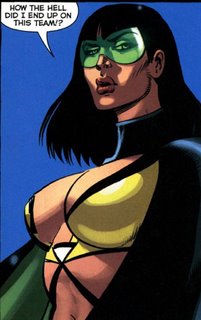 It's true, male characters are killed. Major Force kills Major Victory on a whim. Many people of indeterminate sex are beaten up or exploded. But taken over all, given the starting ratio of males to females (about 6:1) it seems kind of odd that more women should be seen dying than men. I'm not even going to get into Black Baron's suicide love slaves.

Okay, on the odd occasion that Phantom Lady managed to get a line she did come across as the most sane person in the entire story, and I did enjoy the general chaotic lunacy, but Battle for Bludhaven has a real misogynistic streak, and underneath all the fireworks there is barely half a story.
Posted by Marionette at 8:47 pm

I haven't read the book, but it's certainly generally true that women always seem to be the torure or beating victims far more often than men.

I agree on the torture part; however, I've seen books where guys die regularly. It seems the comics like the torture part because it gives the threat of rape, which is supposed to keep us in suspense~sarcasm.

I feel bad since I recommended this. I saw the problems too, but at the time was reading I had other things to rant about and they didn't stick in my mind past a couple months.

Its one of those cases of this crap being so common that you forget exactly where it is unless you note it. You edit it out in your head in favor of what you do enjoy, and then you walk away with a vague feeling of "This happens EVERYWHERE" without remembering the reference.

Sorry, would've warned you if my brain had been working.

It's okay, Ragnell. The book has many flaws (that's part of its charm) and the misogyny is not aggressive or (I think) deliberate. Alice and Tilt survive the entire story untouched, although they don't exactly contribute much, either. I was expecting someone with a dumb name like "Tilt" to have powers.

As with about half the cast, you are left wondering if they have appeared anywhere before, and if they will ever show up again.