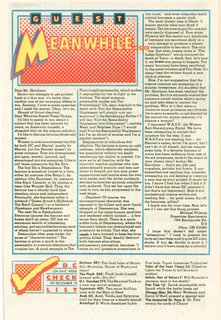 Dear Mr. Giordano, Here’s two attempts to get printed.
Look at it this way: it’s better than another one of my annoying letters to you. Anyway, I love to make speeches and I need the money. Okay, let’s go. (Sound of throat clearing)

Dear Whoever-Reads-These-Things, I’d like to speak to you about a subject that has been ignored for years, an American tragedy, a shameful blot on the comics industry. I’d like to discuss heroine abuse and neglect.

Women in comics are treated terribly by both DC and Marvel, mostly by Marvel, but Jim Shooter doesn’t do guest columns. They are downplayed, put-upon, wasted, ignored, and stereotyped into six categories. I like to call these categories the Six Do’s.

The first Do is Dependence. The heroine is somehow linked to a hero, either by costume (like Batgirl), by relation (like Huntress), by romance (like Black Canary), or by joining a teem (like Wonder Girl). Thus, the heroine has a bloody hard time standing alone and independent. Eventually, she becomes either a sidekick (“Green Arrow’s Girlfriend, The Black Canary”) or a bookend (Hawkman and Hawkwoznan).

The next Do is Deemphasis.
Everyone ignores the heroine and hopes she’ll go away. DC has an
enormous wealth of interesting, exciting, and enjoyable heroines, most of whom haven’t appeared in years. Demoralize often goes under the guise of “characterization.” The heroine is given a quirk in her personality or a mental aberration that cripples her. A good example is The Thorn’s split personality, which makes it impossible for her to fight in the daytime. The most common personality modes are The Bubblehead (”Oh, dear, this fight to the death with Vrot the Remarkably Unpleasant will simply ruin my manicure”), the Battlehappy Battler (“I will tear Vrot the Remarkably Unpleasant into little pieces”), and the Weak and Helpless Type (“I would fight Vrot the Remarkably Unpleasant, but I’m so afraid of snakes and I’m a pacifist anyway”).

Deglamorize is ridiculous but effective. The heroine is given an ugly costume, which effectively weakens her popularity without too badly weakening her ability in combat. I’m sure we’re all familiar with the beautiful weather-goddess who was phenomenally popular and was just about to branch out into solo guest-appearances and maybe even her own mini-series until the writer suddenly decided to have her go punk, complete with mohawk. This set her upon the road to ruin as she progressed to the next stage...

Depower! Of course, the aforementioned character was exposed to the fullest and most literal example of Depowering. She was stripped of her superhuman qualities and rendered utterly normal ... a fate worse than death. There is a more subtle form of Depowering, where the heroine’s talents are downplayed and presented as trivial. That way, she needs a hero around to keep her from getting killed. Thus, deadly destruct­bolts become stun-stings, extrasensory perception becomes “I sense en evil presence somewhere in this room,” and even telepathic mind-control becomes a parlor trick.

The most drastic step is Death. It means exactly what you think it means. The heroine is quickly and not-very-neatly disposed of. Ever since Phoenix left this mortal coil, hundreds of heroines are sacrificed daily in a vain attempt to produce a classic comparable to her story. The only one that even comes close is “The Judas Contract,” which featured the death of Terra—a death that, let’s face it, we knew was going to happen. Too many heroines have been sacrificed to the great volcano god Fan-Dom. It’s about time the writers found a new cliche to overuse.

Now, I’m not suggesting that the comics creators are engaging in a sinister conspiracy. It’s doubtful that Mr. Giordano has even realized the problem. But it is 8incerely wished that someone would realize what’s going on and take steps to correct the problem. Why is it that when a character must go insane, sacrifice her life to save humanity, or get blasted by the neural-vac power-remover, it’s always a woman?

I represent W.A.S.P., the Women Anti-Stereotyping Patrol. We have been attempting to correct this injustice (by the way, if any W.A.S.P.ers are reading this .. for Heaven’s sakes, write! I’m good, but I can’t do it all alone!), but we require some help. If a favorite heroine of yours has been suffering from one of the six symptoms, write to the comic of your choice (don’t bother Mr. Giordano . .. that’s my job) and complain, politely but firmly. If any submitters are reading this, consider revamping an old heroine or creating a new one as your project. It might be fun. I know I had fun when I did it (I didn’t have fun when DC rejected it, but that’s not important). And if any professional comics writers are reading this ... for gosh sakes, lay off the heroines, willya?

I thank you for your time. Now let’s see if I can get this thing printed.
Michael Pickens
Greentree Apartments
784 Blacksnake Rd.
D-4
Utica, OH 43080
I hope this doesn’t fall under “defamatory.” I tried to present the facts as I see them and to give DC a fair shake. If you do decide to print it, I believe you’ll have room for a rebuttal.

Now personally I disagree with his comments about ugly costumes (I liked Storm's punk look, and the ghastly costume designs of the Justice League of the late '80s were distributed equally between the sexes. More recent female costume designs may be problematic but looking ugly was never the intention), but a lot of the rest echoes what is being said right now.

So next time anyone tells you that they recognise the problem but things can't be changed overnight, feel free to point out that after twenty one years you are fed up of waiting.
Posted by Marionette at 5:20 pm

Yes, it HAS been quite a while hasn't it? Well said.

Wow, that list really does have it down, I recognized three of those (Dependence, Deemphasis, and Death) happening to some characters I like.

That was awesome but also depressing (because it was written twenty one years ago)to read.

And Storm's punkery definitely belongs in the bad ass category.

I loved Storm's "deglamorized" punk outfit far more than her previous costume and she continued to lead her team while she was "depowered" because her leadership skills were part of her personality not a superpower.

Thank you for the transcript.

And people are still saying I'm wrong about sexism in the industry, and how long it's been going on.

Twenty-one years. At least there's a movement of blogging about it and a discussion happening, and a vital community. That's more than we had twenty-one years ago.

Not only do I remember that 'Meanwhile...' from the original comics, but in the past, I don't know, year or two, I've mentioned it to a few people of some prominence in the feminism/comics/internet world. Glad to see that it has come to the surface.

Pickens was also something of a letter-writer; I also came across a Legion issue from that era where he pointed out that the female Legionnaires tended to have passive or subtle powers while the male Legionnaires were the ones using superstrength and hosing energy blasts around.