In the wacky world of comics you can hardly throw a rock without hitting a copy, parody, or homage to Superman, and every writer at one time or another seems to feel the need to do their own take on Batman, but historically, Wonder Woman clones have been fewer and further between.

One of those few was Moon Girl, and the only interesting thing about her was her struggle to find an identity.

If Moon Girl were published now she would be an Alan Moore post-modern superheroine who skipped from one genre to the next in a loving commentary on the history of comics while examining the woman as symbol and possibly metaphor, not to mention giving him an excuse to write in a variety of period styles. In fact he could have saved making up Promethea at all and just obtained the rights to Moon Girl. He could have even reused the original covers. 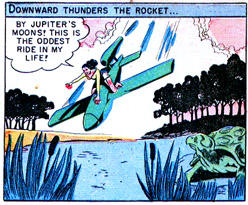 It was 1947 and the first wave of the Golden Age was receding. EC comics had yet to establish an identity as the home of horror and were trying a variety of different genres. Almost their only foray into superhero comics was Moon Girl, and they didn't waste any expense on originality. Her origin is a complete steal from Wonder Woman: Princess of an exotic foreign land with a tradition of powerful women wins a contest and moves to America where she fights crime in a costume composed of red, yellow, and blue. With moons instead of stars on her pants, and greek sandals. She even had a cheap copy of Wonder Woman's robot plane. It was far from invisible, but it was remote controlled by her own mental commands like a well trained dog... that, er, flies.

The writing is so clumsy that at times it feels like you are reading a translation by someone for whom english is not a native language, and Moonie is a bland cypher with all the depth of the paper she appears on. In her secret identity of a teacher with the somewhat obvious name of Clare Lune she seems to randomly move jobs to wherever the dictates of the 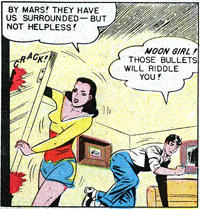 story require, her sidekick/boyfriend trailing behind whenever she remembers to tell him where she's going. And she's even worse than Wondy for explaining the plot out loud while alone. Her only vaguely original aspect is her magic moonstone, which increases her naturally high strength to whatever level is required by the plot, but fails to affect her intelligence. Thus to prevent a rocket hitting a large skyscraper, she picks up the skyscraper and moves it out of the path of the rocket rather than stopping the rocket before it gets there. It seems to have a variety of other powers as well, becoming all too reminiscent of Green Lantern's ring at times. And of course she invariably loses it at some crucial moment in order to add some tension to the story.

And then in issue #7 the title becomes Moon Girl Fights Crime following the popular trend of tough crime comics, and two issues later it takes an unexpected turn into romance stories, attempting to catch another trend. And it's here that we see the only real stroke of genius as a minor alteration completely changes the meaning of the title as it becomes A Moon, a Girl... Romance.

In fact Moon Girl does even more genre hopping than this. Issue #2's cover featured "The Battle of the Congo" is a jungle story, and issue #4 contains possibly EC's first ventures into the realms of horror with "Vampire of the Bayous" followed by "Zombie Terror" in #5. Based on the information available I'd speculate that she even slipped into science fiction territory at times, and if I found her in a western it wouldn't surprise me for a second.

The chameleon nature of the title could have given Moon Girl a niche in history as the symbolic hybrid who embraced all the genres (she even appeared in a funny animal book) of the comics world in the days when it had genres - A renaissance golden (age) girl. Sadly, the universally dreadful standard of the writing and the bland pedestrian art, whatever the style du jour might be, condemmed her to obscurity as a cheap Wonder Woman knock off.
Posted by Marionette at 6:08 am

Wow--fascinating overview of a comic book I've never even heard of. How many issues did this run?

12 issues in total, before it was renamed to Weird Fantasy, but the last three didn't feature Moon Girl at all.

That is AWSOME! Bet sales for those old issues will see a spike now.

Damn. I should have gone looking them before I got anyone else interested in them.

How oddly similar to Luna Moth. I wonder if that's where Michael Chabon got the idea.

Okay, now I have to read Kavalier and Clay. I was just reading an interview with Chabon earlier today, too.